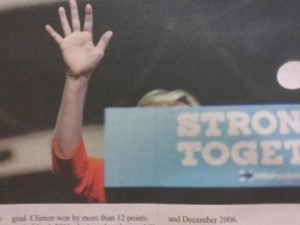 I am upset by the decision of Yated Ne?eman to show the hand of Hillary Clinton. Where did their seichel go? Now there will be pressure on them to treat Trump the same way. We all know what terrible lewd thoughts cross American minds now about his hands. They might just as well start showing pictures of Metzitzah B?Peh.

This whole business of pictures is a bad idea. You now have pictures of rabbonim from earlier eras in their youth. Suddenly you have clean shaven poskim and roshei yeshiva, loy aleinu, not to mention bubbes who are untznius and zeides without Borsalinos. With the disgusting blogs around, PhotoShopping eventually gets revealed.

Even worse, the dignity of rabbonim is beshmutzed with them seen riding around camps in golf carts, mamish like goyish politicians, or even worse, Hollywood stars.

I don?t like to sound like I just kvetch. But it gives me agmas nefesh to see our rebbes meeting with politicians. First of all, this makes it seem like the two are equal. There should be no such pictures unless the politicians bow down to the rabbonim. Second of all does no one have a steam iron? Why are the yarmulkes on the politicians always cheap satin and always creased.

And now we have wedding pictures with no kallah. Where is the seychel? Better there be no pictures.

I say pictures are for amaratzim. Instead we should just have words of torah and chizuk. Naturally, this should be without mentioning the name of the woman.

Baruch hashem we live in America. Hashem bentshed us with English, a language where it is not clear whether you are talking about a man or woman. In this way we are better off than Yidden in EY who had to refer to a certain prime minister in loshon nakevah.

← Shavuos Schedule
Warning Against Dating Dati Jews as a Gentile →

27 comments for “Who Needs Pictures?”