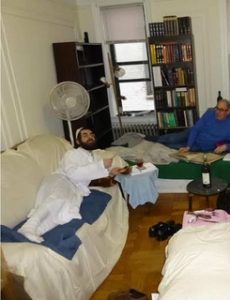 In honor of Pesach, a yom tov that brings anxiety and longing to frum and OTD alike, I present to you a vort from Mar Gavriel, the author of a fabulous haggada which, due to my blogger’s nature I didn’t post on time for you to buy in time for this year’s seder but which you should nevertheless buy in time to pack up with the Pesach boxes so that it comes up with the newspaper-wrapped dishes, silverware and the Maxwell House haggada from twenty years ago. Stop using the Maxwell House haggada already!

This wonderful haggada will appeal to both the frum, who love digging up old forgotten piyuttim (and having them translated) as well as the OTD, who love unconventional divrei toireh. In other words, this haggada was made with the Frum Satire audience in mind. I apologize for not posting it sooner.?

Avoodim Hooyeenee, we were slaves in Egypt. But were we really? Possible, but there’s no hard evidence for it. And way back then, was there really a “we”, anyway? And if not, why are we here at the seider table?

OK, now that that introduction is over, we can finally tell the story, right? So we begin with Terach and Avrohom, but then we get side-tracked, and start darshening each of the pesukim, and bringing pesukim aggav other pesukim. And, one of my favorite lines: v’ess ha’dchak zeh halachatz, “and the oppression [biblical Hebrew], doos maynt the oppression [rabbinic Hebrew]”. And then we translate that into Yiddish. Or Ladino. Or Arabic. Or English. Because it’s not about yetzias mitzrayim. It’s about translating earlier idioms into later idioms, Jewish continuity throughout the generations, through the ages, as it morphs from one form to another.

Vayoitziainee Adoynoy Mimitzrayim — finally we get to the posuk that is ikkar sippur yitzias mitzrayim. But almost as soon as we have started it, it’s over, and we’re playing arithmetical games about fingers and hands and plagues. Moulding the tradition. Changing the tradition. But still holding on to the tradition.

The tradition of what? Of Yetzias Mitzrayim? Did it even happen? It doesn’t matter. Maybe you were off in the bathroom for the one minute when that one posuk was recited, or maybe you were at the table. But that’s really just an excuse around which to build the entire Haggodo.

The rituals of lying around on couches, drinking several formal cups of wine over words of praise to a divine being, recipes for charoises, dipping vegetables — all these reflect Greco-Roman reality, not Egyptian reality. The development of the tradition. The transmission. The study.

And, a quote from the?Haggada:

The recitation of the verses Shefokh ?amathkha is not mentioned in the Talmud or in Geonic literature; it first appears in haggadoth in Northern France and Ashkenaz in the 12th century, and has subsequently spread throughout the world. It functions as an introduction to our prayer at the beginning of the second half of Hallel: Not for our sake ? but for Thine, give glory ? why should the nations say: Where, now, is their god?? Why do we care about this? For, as we say in Shefokh, ?they have consumed Jacob, and destroyed his dwelling.? It seems that the practice of saying Shefokh is related to the idea that the four cups allude to the retribution against each of the Four Monarchies, of which the fourth, Edom-Rome-Byzantium-Christianity-Europe, is conceived of as lasting until our day (and certainly was in actual existence in 12th-century Europe). After this Evil Empire drinks the Cup of Retribution, we shall sing Hallel to our Redeemer: For Thou hast spared my life from death, my eye from tears, and my foot from faltering. Then may He show us wonders, as in the days when we went out from Egypt.

Although in our day there is no Roman Empire ruling over us, there is nonetheless an important lesson in this, for the experience of seder night: we can reach the experience of our ancestors? ancestors, who left Egypt, only through the medium of our ancestors in the time of the Talmud and the Middle Ages, who lived under Roman dominion. And just as all the Jews in their time were obligated to view themselves as if they had personally left Egypt, so must we view ourselves as if we lived in their days, under Rome.