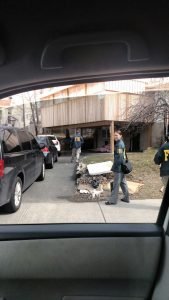 No one’s celebrating the FBI raids in Monsey, Kiryas Joel, Williamsburg and who-knows-where-next. No one with a heart, that is.

The fact is that frum schools simply cannot survive on tuition alone, as the posuk says “lo al halechem l’vad yichyeh ha’adam” (we’ll leave off the rest of the posuk for now because that’s partially responsible for the crushing financial burden in chassidish and yeshivish communities.) So what’s a school supposed to do if its parent body cannot afford to pay full tuition, its philanthropic pool is way maxed out and its alumni is helping pay their own grandchildren’s tuition with nothing left over to give back?

In the olden days they milked the lunch program, moving kids from school to school on inspection days to fill up every school’s lunchroom. When I was in school where they only had secular studies through 4th grade level (as you can tell), they had closets stacked with books through the 8th grade level. I don’t know this for a fact but I always assumed they must have claimed they were teaching all those classes, I don’t think it’s an unsafe assumption.

Those were the innocent days of petty theft. We’re on a whole new level now.

Now we stack the boards of education with chassidim who vote to give schools brand new school buses, to classify children as special needs and certify the schools as eligible to provide for those special needs so they could collect $27,500 from the state for each of those students; beats sending the kids out with a pushka on Sundays.

I know a principal of a school who was approached by some chossid asking how much his school gets from the E-rate program and saying he could quadruple it and they’ll both make money (reminds me of the Black Hattitude lyric about “insurance for cars? huh, let me see, maybe you can do an insurance job for me.” “sure we can, we can total your car and make lots of money too”). The principal said he’s not in that business. The chossid called back a few days later and said “remember what I said about the E-rate program, yeah forget it, I decided not to go into that business”. Let’s hope he didn’t.

As a kid, while riding my bike down Maple Ave in Monsey one day, I was stopped by my school’s administrator (it feels funny to refer to the bus driver, cook, maintenance guy and all around shlepper as the “administrator” but I guess that’s the closest title) who pulled over when he saw me. He called me over to his car, showed me a stack of papers and said “can you sign the name Yaakov Schwimmer right here?” and then, in this offhand manner he sort of dropped this: “I just need this signature to look different than this one”, pointing to Shmuel Chaim Green’s signature.

The statute of limitations has expired for whatever crime I committed that day but it hasn’t for the ones the FBI is investigating now. What the frum world needs is a massive, massive overhaul of its values. Unfortunately, it’s not likely that even the arrest of tens of its citizens will result in the changes needed, I don’t think the desperation is deep enough. It’ll come, but it will take more time, more arrests and much, much more poverty before it does.