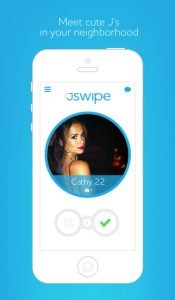 I was recently shmoozing with my chavrusa, Shmuli Grosshmeckel, and (unsurprisingly) we ended up complaining  about our struggles in shidduchim.

I was complaining to him about how nowadays, though the advanced state of technology is supposed to make everything more efficient, unfortunately it made the world of shidduchim even more complicated than it was originally.

Shmuli asked me, “Have you tried JSwipe?”

I told him I have not, but that I was intrigued.

He proceeded to show me his profile. For the most part, judging by his pictures, like an erlich yeshiva bochur with great middos, but I got confused when he wrote something about being a “big spoon”.

I asked, “from where to we derive the meaning of this phrase? Why specifically a spoon? It could also be a fork. Or a knife, since you are not Palestinian. And what is the maaleh of a big spoon over a little spoon?”

He smiled ruefully and then explained, “It’s an analogy. Have you heard about the concept of a gavra and cheftza? The big spoon symbolizes my gavrus. Hopefully the cheftza that I am attracted to will be in search of a gavra and will want me to fill her opening.”

My interest was piqued, and I wanted to find out more.

Then I noticed another puzzling statement in Shmuli’s profile.

“Shmuli, it says you want no strings attached…what on earth could that possibly mean?”

Shmuli gave me a quizzical look, as if he was surprised I didn’t understand.

“Ooohh, now I chap…you’re trying to say that you’re a yeshivish BMG guy and you are not interested in a modernish girl who believes in egalitarianism.  A girl who would never get ridiculous ideas about wearing tzitzis, which has strings attached, or tefillin, or learning gemara, or venturing outside of the kitchen for that matter.”

However, I was still skeptical.

“But let’s talk tachlis. How many shidduchim are actually made on JSwipe?”

“Well…” Shmuli said, seeming as though he had been caught off guard, “people don’t usually use it for marriage.”

Now I was really confused…and then a terrible realization hit me.

He blushed a little and averted his gaze from mine before nodding slowly in the affirmative.

“It’s not always like that though,” he hastened to reassure me, “It’s yesh v’yesh. Some people use JSwipe solely for superficial relationships, and some use it for finding a partner with whom to build a binyan adei ad. Intentions vary with each individual.”

And then the chiddush hit me. The scenario he describes brought back memories of a Ramban I learned in 10th grade.

In the beginning of parshas shelach, the Ramban discusses why sending spies was considered a sin, even though technically Hashem had given them permission.

Moshe Rabeinu had motive A in mind, but unbeknownst to him, the rest of bnei yisroel wanted to send spies for motive B. This is why Hashem held bnei yisroel accountable for the act of sending spies, because this motive shows a lack of bitachon.

L’cheoirah, there are 2 different motives that guys have on JSwipe. Some guys are genuinely looking for the beshert, whereas others are just looking to have a good time.

My chavrusa let me see his account so I could get a picture of the kind of girls who would be using such an app. We chanced upon a very, um, attractive picture of a girl in a bais yaakov uniform.
I mean, I think it was a bais yaakov uniform. She was wearing a pleated skirt and button down shirt. The thing is, it was a little bit shorter than my sisters’ bais yaakov uniform. By a few feet or so. Also, she was wearing these strange stockings that looked a little bit like a fishing net. And I think that she maybe forgot to close the few top buttons of her shirt. But nevertheless, she was quite attractive. So I decided to look at her description.

She claimed to be a girl who is “Not looking for one night stand.”

I excitedly said to Shmuli, “This is great! It shows that limud torah is important to her. You don’t have one night stand. You have a whole shelf full of seforim. Clearly, you are on the same page in terms of what you are looking for.”

“It’s a match!” His iPhone proclaimed.

“Man, this is mamish hashgacha pratis! I really hope it’s bashert and that things go smoothly on the date. There’s just one thing I’m confused about, Shmuli…if she wants to do night seder with you, why would you need to bring your tefillin?”

4 comments for “Jews of JSwipe”