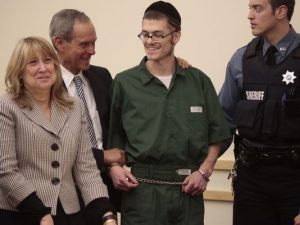 Like all frum communities, New Square assures the world that it takes crime seriously – if only there was any crime inside it’s borders, but there isn’t any, as is proven by the latest release of it’s latest prisoner.

Normally when a kid is molested and the surrounding community did all it can to keep the victim quiet and protect the molester one can accuse that community of not caring about its children, or only caring about its image (chilul hashem, anyone?) But when a community, like Skver (or Satmar with its latest campaign to have its most famous molester, Nechemya Weberman, released,) truly believes that by being a member in good standing you are ipso facto incapable of committing a crime then what does it do to make sense of this? Simple! It fights with all its might to condemn the victim and exonerate the perpetrator.

Saul Spitzer may indeed, as New Square’s in-house attorney, Kenneth Gribetz, argued, be remorseful for what he did, and he may indeed have been “youthful” at 18 when he committed the crime (although if he had gotten married instead of going to jail no one would have thought that a rash, youthful act, but whatever) but what about his victim Aron Rottenberg? While New Square threw money at the rebbe’s former haus bucher, what has it done to apologize to Rottenberg? Once again, if you’re convinced there’s no crime, there cannot be a victim. In the Skver state of mind Rottenberg burned himself on 50% of his body, he should apologize to himself. Or maybe it was an act of God, the rebbe has powers that way.