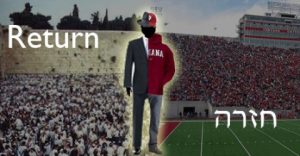 So Ignorant Avi wrote a piece called “Where’s the Orthodox Counterpoint to All Those OTD Books?” Where he argues that the fact that OTDers are writing books while BTs aren’t means that OTDers write books to settle scores and express pointless negativity, while BTs are precluded from doing so because Judaism isn’t keen on settling scores or expressing pain – Ignorant Avi frames it this way: BTs have no need to revisit their childhood pain, Orthodoxy solves all their problems. (“they’re just happy to be home”)

We could, of course, point out the many flaws and factual inaccuracies in Ignorant Avi’s latest Forward piece.

We could point to the fact that there are plenty of BT memoirs.

We could point to the fact that BTs do everything they can to hide their past – not because “they’re just happy to be home” but because the ultimate tool of frum control – the shidduch market – doesn’t favor BTs, so minimizing your past and focusing on integrating is a full-time occupation for BTs in the loving embrace of the frum community.

But facts don’t matter, conjecture doesn’t matter, opinions don’t matter. Ignorance is the key to being a good bully pundit like Ignorant Avi. So let’s do it his way.

Ok. Put your two thumbs inside your ears, let you index and middle fingers cover your eyes, put pressure on your two nostrils with your pinkies, make sure nothing from the real world seeps through and let’s go:

Why Aren’t There Any OTD Memoirs?

Compelling personal essays and well-promoted books by “baal teshuva ” writers — Jews who were raised non-Orthodox but were lured into the Orthodox lifestyle with promises of a loving community and a shidduch — have become something of a cottage industry.

Some of the accounts are somewhat condescending, even cynical, embodiments of the perennial phenomenon of intrepid youth discovering truths to which their parents are lamentably oblivious. It’s enough to put you in mind of the slyly perceptive comment often attributed to Oscar Wilde: “I’m not young enough to know everything.”

Other narratives, though, are wrenching to read, detailing familial or communal neglect, insensitivity or much worse. No one, it should go without saying, has the right to judge a person who has been abused or denied the space to express his or her individualism and, as a result, decided to seek fresher air.

With all the angst and hair-pulling going on in frum media such as, Cross-Currents, Yated, Ami Magazine, Mishpacha etc over the crisis of faith posed by scientific discoveries, rabbinic abuse, the internet, one would get the impression that frum communities are draining faster than the Colorado River.

One would also think that there would be a plethora of articles and books written by those who have left, and yet there are none!

It’s possible that some who have left Orthodoxy weren’t bullied on their way out by friends, family, rabbonim and their lawyers, but surely at least some of them would have suffered this treatment.

The dearth of exposés and lamentations, I think, stems from two things. First, that the secular world, unlike the Orthodox with its annual recitation of the commandment to kill Amalek and its foot stamping on the name of Haman, is not keen on “settling scores” or pointless negativity, particularly toward parents. Those who’ve joined the secular community are encouraged to go to therapy, get in touch with their feelings and express them in a positive way. And second, OTDers naturally don’t feel the need to look back in anger or pain; they are content to leave the Orthodox world behind them.

Which is not to in any way disparage at least some of the “I escaped Reform” accounts, or to downplay the severe challenges that some BT Jews have faced and in some cases continue to face. It’s simply to suggest that perhaps those who have travelled in the other direction feel no compulsion to look back — they’re just happy to be home.

4 comments for “Why Aren’t There Any OTD Memoirs?”