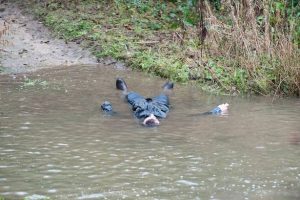 When I was in Telz yeshiva there was a story told about Rabbi Eizik Ausband. It was said that as a young man in Telshe, Lithuania, he had thrown a moiser into river and drowned him. One brash bochur asked him whether the story was true and he confirmed that it was. The moiser in question had supposedly reported tax evaders to the government and that earned him the death penalty from those righteous Jews.

What does one do when someone in their community (whom they know to be absolutely innocent) is accused by a frum kid of being a molester?

If it were up to me? I’d say throw the kid into the river! You cannot tolerate a moiser in your community. Didn’t Agudas Yisroel Pasken that reporting child molesters to the goyishe authorities is mesirah? Nu! What else do you need? Throw him in the river!

But the gentlefolk of the South Fallsburg yeshiva community are not as frum as me, they have engaged in gentle persuasion to get the kid to retract his (obviously) false claims. They gently put the kid’s father in cherem, because in our 2,000 year golus cherem has proven to be a gently effective tool in getting people to change their minds.

The yeshiva community would have been better off simply throwing the kid and his father into the river, if they had followed our mesoirah and done what my rosh yeshiva did they wouldn’t have had to raise $200,000 for the alleged molester’s bail, they wouldn’t have to hire the alleged molester an attorney and they wouldn’t be still scratching their heads trying to figure out how to get the kid and his father to listen to daas torah. Because it has become all too obvious, unfortunately, that we’re in a worse golus now than we were in Lithuania and Poland. Back in the olden days, while we may have been beat up by the goyim, at least we were able to also beat up our own people too on occasion, which relieves the pressures of this long golus, but here in the U.S. even choshuve rabbonim like Elya Ber Wachtfogel find it hard to throw moisrim into rivers, or use illegal intimidation practices.

This golus is getting too bitter, we really need moshiach to come already.