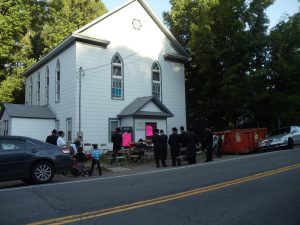 I want to talk about the Catskills, I want to tell you how terrible the kosher food is here and how restaurant owner, employees and patrons all stare at you if you’re not wearing a yarmulke, I want to tell you what horrendous drivers chassidim and yeshiva bochurim are. Take that back, not only yeshiva bochurim who just got their licenses, anyone with NJ plates is a terrible drive in the Catskills, but the Passaic ones are a little better than the Lakewooders.

I’m not really equipped to talk about these things, though, because I rarely visit kosher restaurants in the Catskills and when I do, I do my best to erase the experience from my memory as quickly as possible, it’s really traumatic. So instead I’ll share some awesome Heshy posts on these topics from the archives. Check ’em out.

Defending the Chareidim. Here Heshy talks about doing camp food program inspections and having to explain to non-Jews why chassidish kids stare and why they trash the beautiful mountains with their Paskesz wrappers.

How to get free food at kosher restaurants. Where Hesh shares his awesome strategy for getting free food from Dougie’s. Also, Nextels!

Shabbos Nachamu in Woodbourne. Some musings on the decline of the decadent 90s scene in Woodbourne and a lament of the fact that there’s nowhere to go nowadays if one wants to see girls in tight slinky skirts that show the underwear lines. Also, on the frum love of Metallica and prepubescent altar boys choirs.

Woodbourne: Fond memories of chassidic hitchhikers and frummy rebels. There are many more posts on Frum Satire that talk about the Catskills scene but I’ll end off with this one because it’s a throwback to a time when Heshy tried writing prose. I, for one, am glad he found his voice with quick-and-dirty descriptions of frum mishigassen, grammatical errors, typos and all.