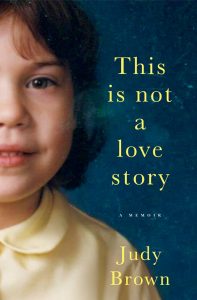 Readers of Hush know that Judy Brown can make you cry, take you by surprise and make you dry your eyes at the same time*. They’ll be looking forward to the same experience when they buy her new book, This Is Not a Love Story: A Memoir which goes on sale today, and they won’t be disappointed.

But readers of Hush may also come with some notions that they know Brown already and don’t have much to learn, on this they will find that they’re wrong. Gittel is now Menucha, and Devoiry is nowhere to be found. In This Is Not a Love Story Brown’s family comes into clearer focus and Kathy, the friendly upstairs goyishe neighbor, is still there along with her very goyishe husband.

This Is Not a Love Story tells of the binary world Judy Brown grew up in: there are Jews and there are non-Jews. The former are good, the latter are bad. The former are going to heaven, the latter are going to hell. There are also secular Jews, but they’re just like non-Jews; they’re bad and they will go to hell.
Her parents grew up in Jerusalem. There are two sides of the city in Jerusalem, the rich side and the poor side.
There are the royal rabbinic dynasties and there are milkmen.
There is falling in love and touching, which is disgusting and is reserved for goyim, and there is not falling in love, never touching and just barely liking your spouse.
There is normal and there is crazy.
There is Borough Park which has no goyim, but only righteous Jews, and there’s Flatbush which has Ku Klux Klan cross-burning parties at night.
There are Nazis and there are Jews. But maybe Kathy the goy will hide Menucha when the Nazis come.
But her family occupies a middle zone. Her parents may have fallen in love before marriage and they may now live outside Jewish-dominated Borough Park among the goyim of Flatbush, but they are still devoutly religious. They may not live near their hasidic sect’s shul, but her father still puts his shtreimel on of a Friday evening and walks to the local shul with his sons in tow.
How to make sense of this confusing space her family occupies?

And what about her younger brother who’s crazy? The reason he’s crazy is because his parents dared to marry each other out of love and that’s very bad. Just as she did in Hush, Brown explores communal responses to situations they’re uncomfortable with; in the hassidic world 20 years ago putting up autistic children for adoption wasn’t uncommon at all.

But This Is Not a Love Story turns out to be a love story after all. We learn how her parents dealt with this problem child, this child everyone called crazy and whose craziness was blamed on them; in a binary world where there’s only normal and crazy, Brown’s parents, with love and perseverance, manage to make normal out of crazy, just as they had found love when no one wanted them to.

3 comments for “This Is Not a Love Story – A Review”