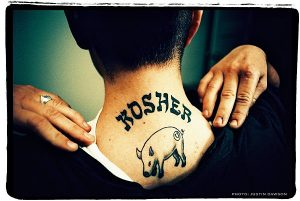 “Excuse me, are you Jewish?”

“Have you eaten any bacon yet today?”

This exchange will become the norm in yeshiva and seminary campuses and on street corners in Borough Park, Lakewood, Williamsburg, Monsey and even New Square if we don’t shut Footsteps down. Everyone is urged to call their state senators and urge them to sponsor a bill to shut down Footsteps.

A recent conference call with Footsteps staff and kiruv volunteers was transcribed by a frum eavesdropper who shared it with Frum Satire. This call was in preparation for Project OTDKluxKlan where OTD folks will invite frum people over to their wild pool parties where there will be untznius women, beer, and unlimited sex and drugs. The purpose of Project OTDKluxKlan was to show frum people that OTDs are perfectly normal, well-adjusted, happy individuals, even though they have endless sex, eat endless cheeseburgers and do drugs all day.

Footsteps staff gave the following tips to the volunteers, who are not kiruv professionals:

People don’t remember arguments- they remember IMPRESSIONS: were you disparaging or bullying. Don’t bully them about their religion or beliefs, it’s not their fault, they are tinokos shenishbu.

People choose OTD because of:

These comments were first reported on the blog Jewish Outreach.

← Changing the Immutable – A Review
Laying Blame for a Suicide →