Look, we’re not children anymore, let’s not pretend that Orthodoxy’s mesorah which goes back to Moshe Rabbainu is any less crooked than the Tail of the Dragon and let’s not pretend it doesn’t have a proportionately equal number of annual casualties. Those casualties usually come, like those at the Tail, from those who love it most, who take it seriously and who therefore throw their lives into it.

One needn’t go further back in history than the past fifteen years when The Making of a Godol was banned because it told stories about the previous generation of gedolim that were true but which would have either unmade their godol status or it would have shown sincere young bochurim that they can read Anna Karenina during their lunch break between first and second seder and then grow up to be like R’ Yaakov Kamenetzky. Likewise Natan Slifkin’s books were banned, not because anyone could dispute what he wrote but precisely because they couldn’t dispute him, which should be obvious; obviously you don’t need to ban a book you can dismiss.

So the Orthodox Created the Past in Their Image

But what about books we can’t dismiss or ban? What’s to be done about those?

Look, we’re not children anymore, we don’t have to pretend that the Inquisition invented censorship and book banning. Luckily we live in the 21st century in a free country where a brilliant professor of Judaic studies has the liberty to research historical acts of Jewish censorship going all the way back to Chazal editing the Torah! Marc B. Shapiro expertly lays out the history of Rashi’s explanation of this Talmudic censorship of the chumash (Bereishis 18:22) and ArtScroll’s censorship of this Rashi. 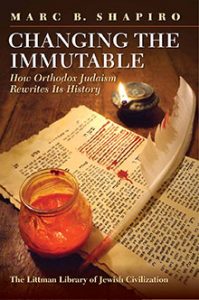 The list of matters that are censored varies from the description of amora’im arguing over who has bigger genitals to erasing women out of Tanach to erasing poskim who were lenient regarding women wearing pants and not covering their hair to the famous line in the shulchan aruch about the minhag of kaparos being a minhag shtus to photoshopping yarmulkas onto gedolim to photoshopping longer sleeves onto rebetzins to photoshopping gedolim out of photos with other gedolim to making hundreds of haskamos in seforim disappear.

But who needs all that? I say the frum aren’t even shy about their censorship! Internally they’d like it if the issue is never raised, but if challenged they don’t deny it, they believe they are the arbiters of Truth and the past must be made in the image of the present.

What I learned from this Book

Some of the instances of censorship, as well as their justifications, (it takes more than a little chutzpah for a publisher to justify himself by saying the author he censored is now in Heaven and knows that he was wrong. I say the publisher should first go to heaven himself to find out if he’s right,) are a little shocking, even for one who doesn’t expect any better from the frum velt. Nevertheless, after getting over the initial shock I’m back to being unsurprised by it. Plus the list of censored material is endless and this book is very finite; Shapiro himself didn’t set out to compile a definitive authoritative list of all frum censorship.

So what did I learn from this book?

First, as usual, I was highly impressed with Shapiro, both for his careful scholarship and for his interest in this topic. I couldn’t help but reflect throughout my reading of the book how amazing it is to me that anyone could have such exposure to, and deep knowledge of, the all too human construct of Judaism and still take such an abiding interest in it. I had the same thought after reading Kugel’s How to Read the Bible, and yet I find that such Judaism is all the more real for its nuanced understanding, it’s certainly a lot less fragile than the chassidish/yeshivish variety.

Secondly, reading this book and the footnotes I was reminded to what extent frum censorship has been successful. I’m not even referring to any of the cases of censorship discussed in the book, rather I’m referring to the fact that your average yeshiva bochur will never hear of this book just as he never heard of all the sources Shapiro cites – Haym Soloveitchik’s famous essay Rupture and Reconstruction, Yoel Finkelman’s Strictly Kosher Reading, David Assaf’s books on chassidic history, let alone James Kugel’s How to Read the Bible and to speak nothing of the blogs he mentions – On the Main Line, Seforim and others.

So look, let’s not be children; read the book and educate yourself, and don’t be shy to give it to your children too, it may even help their Yiddishkeit.

48 comments for “Changing the Immutable – A Review”