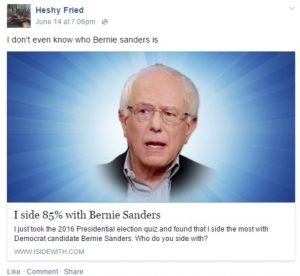 So I’m seeing all these posts on Facebook from my OTD/Liberal friends saying they took this new Buzzfeed-style tests and they seemed to be very proud of their scores and the trophy they won.

The whole thing is very odd – none of them scored higher than 93% and one even got as low as 78% and they seemed to be inordinately proud of their success! Also, they all won the same old kocker, the guy who looks like he never wore a tie, I suspect he went to school with my grandfather in Brownsville before WW2, and he looks like the guy who takes all the schnapps for himself at the kiddush club.

So I went to the test site to see if I could get a better result. My goal was to get the highest score I could and to win the most goyishe goy on the list of trophies. I thought to myself, “what does a nice white goy, a real American with nice hair, a real goy smile, one whose mother never said “sha!” to him and whose rebbi never potched him believe in?” And with that guiding principle I chose my answers.

It was pretty easy, actually. I just had to think what a soulless, heartless, bottomless pit of a human being would answer and I chose that. Figuring out what such a humanoid would answer isn’t too hard either, after all I do live in the wilds of the Catskills all year where the local drunkard, drug-addicted white trash who haven’t worked since their senior year of high school blame all their problems on the fact that Jews come up in the summer and don’t buy local.

So, for example, when the test asked whether I believe that women should receive equal pay for equal work I responded with an emphatic “NO!” The results came in and I had a 98%! A 98! I haven’t had that kind of score since my aleph bais class, when I took it for the third time! And I didn’t get the yid from the kiddush club either! I got a nice looking goy from Florida! And with a nice blue red and white tie to boot!

I thought I was good, I showed off to all my OTD chevrah. I said “Look! I’ve made it, I’m a real goy now!” But instead of applauding me the way they normally applaud these kinds of achievements at Footsteps events, I was ridiculed, I was told I disgust them, that I should be ashamed of myself. Within hours there was unanimous vote in the OTD community agreeing to ban me and kick my kids out of school.

So although I have no idea what I’ve done wrong, nevertheless I find myself without a community and religion at the moment and I’m in the market for a new one.

← Lining Up The Night Before Opening
Gay Marriage is Here, the Shidduch Crisis is Over →