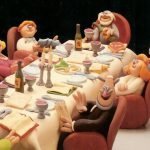 We received our first invitation to a seder just before purim, normally I say yes, excited that someone actually wanted me at their seder and not the last minute desperate attempt to latch onto everyone’s already booked seders. However, this year is different, I recalled some expletive filled rant that I went on last year that went along the lines of “I’m hosting my own damned seder next year, enough of this 3 hour ma nishtana bullshit” or the likes of that.

So it has come to pass, I made it official by inviting several of my off the derech friends to the first night seder and looking around the shul and wondering who wouldn’t be put off by a 2 hour long seder that focused on rushing through the traditional lengthy explanations on why we wash for karpas and how kings leaned back in the day. I’ll be the first to admit that I’m no fan of the seder itself, but I particularly dislike people who spend as much time on hand washing and parsley dipping as they do on the entire magid. I was always told that the mitzvah of the seder was to tell about leaving Egypt.

So far, we have no actual guests, but I’ve informed the wife that we will do our own damned seder and after we finish, we can go crash the ones we turned down. I began to tell her of the few sedarim that my father, brother and I did together. They lasted no longer than 45 minutes and even that felt like too long.

← Purim Depression
All Who Go Do Not Return – A Review →