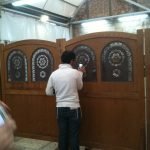 When you live in the frum community it always seems like there’s this great partisan divide between us and them. Us being the frum and them being the not frum, but what’s even more interesting to me is the divide between those within the ever expanding orthodox community. Tonight, I saw something that was a little shocking and I just want to prepare you for it. I was davening in an open orthodox shul, very liberal one might say. I’m not just judging by the ridiculously low and virtually non-existent mechitza.

They have all the liberal ingredients to make it a very uncomfortable place for someone of a more right wing leaning to daven. Women do pesicha, women show up during the weekdays, and the women of this shul even have a full time posek just for them. (yoetzet halacha)

So you can imagine my shock when I noticed that there was a whole crew of chabadnicks davening behind a second mechitza set up within the mens section. I shit you not folks, this liberal anti-frum shul is so liberal that they allowed the frum to have freedom of expression through an actual kosher mechitza. If there would have been room, I may have inserted myself between the half dozen or so men congregating behind it. Instead I found myself in the back row wondering if I was dreaming or not. I also had as clear view of the ezras nashim, if you could even call it that.

I began to wonder if there exists another shul in the world of orthodoxy that would allow a second stricter or less strict mechitza to be erected within the shul. Were there shuls that had tall mechitzas with a section for the more modernishe folks to sit by a shorter section of mechitza. This way they could keep minhagim such as allowing women to kiss the torah and passing their children over the mechitza when the need arose. Are there other left wing shuls which allow the frummies to sit behind their own mechitza?

Does this exist anywhere outside of the occasional wedding in which the one frum family needs to show how religious they are by sitting at a table surrounded by planters?