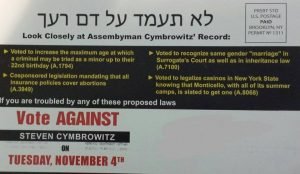 It’s very important before an election to remember who the true power brokers are. To that end the New Yorker ran a story yesterday called The Shame of Borough Park, which chronicles the travails of Sam Kellner, a man who found out the hard way that his community doesn’t follow the guidelines set forth by Agudath Israel. The Agudah talking heads have said numerous times that one must not go to the police to report child molesters unless one has permission from a rabbi, Kellner got permission but was ill-used in the ass anyways.

I think it serves him right though, who the hell did he think he is trying to imprison a respected chazzan, a man who selflessly gave rides to lonely teenagers he found walking to school? He should have just told the va’ad hatznius about the abuse and left it up to them to do nothing, it’s really none of his business.

The only way we can keep the civil authorities out of our business, and arresting those renegades like Kellner who would involve them, is by electing officials who will keep them at bay. Unfortunately Charles Hynes is out and Thompson, a successor who is turning out to be worthy of his predecessor’s respect, is in, and the community machers have had to start their bribing and shmearing all over again.

Anyway, this is all by way of introduction to the important matter of voting today.

In the two missives above and below we are informed that:

So do your duty by your people and vote according to what your rabbonim tell you. 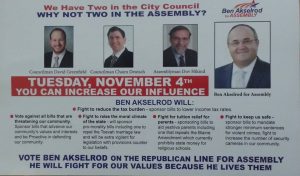 ← 10 Hours of Walking in NYC
Change You Can Believe In →

2 comments for “Get the Vote Out in Borough Park”