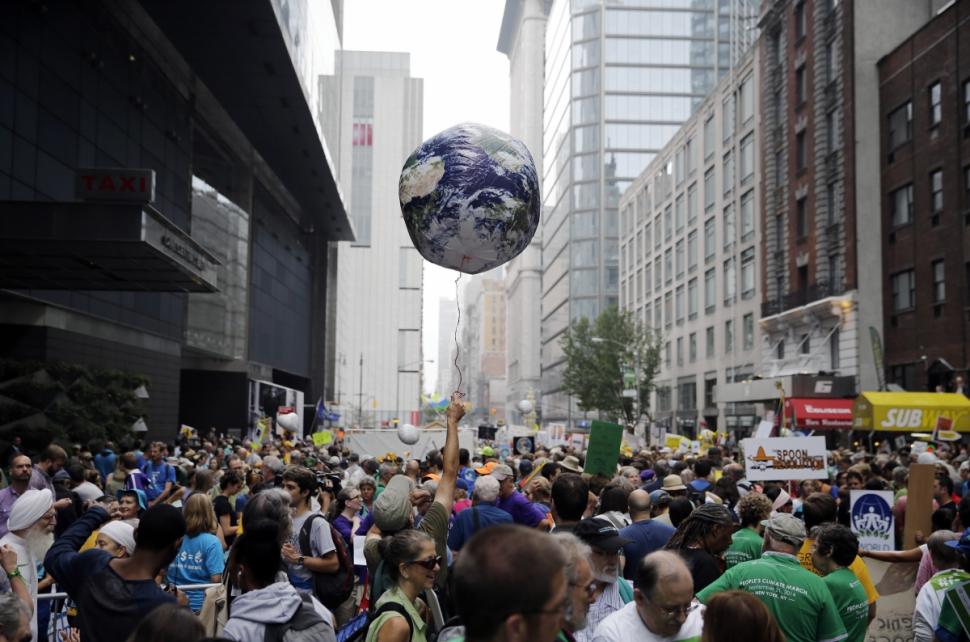 Every day Avi Shafran goes to work at Agudah’s Wall Street offices to serve selflessly, to make sure that no frum molester is reported to the police, and that R’ Shmuel Kamenetzky gets away with being an anti-vaxxer while keeping his da’as torah-driven authority intact.

Two weeks ago the good rabbi went to work and heard sinister voices; he thought they were chanting “kill the Jews!” but when he listened closer he heard that they were only the few leftover marchers from the previous day’s People’s Climate March. But that only alarmed him even more; because as the wise “late writer Michael Crichton famously asserted, that people “have to believe in something that gives meaning” to their lives, and that “environmentalism seems to be the religion of choice for urban atheists.””

Now, Shafran isn’t stupid enough not to realize that this same argument applies to frum people who work for Agudah to add meaning to their vacuous lives, so he goes on to explain that “while zeal is a good thing when sourced in commitment to the true religion, its emergence from a misguided one is cause for alarm. (See: Medieval Christianity, Contemporary Islamism…)” forgetting, of course, that the true religion that he worships had its own phase of wiping out other nations and giving cause for alarm back then…but whatever; that’s an inconvenient truth that Shafran, who closed his Cross-Currents post to comments, doesn’t have to deal with.

But why did Shafran think those chanters sounded sinister? And why “kill the Jews!” of all things these chants might have brought to mind? Dov Bear believes that’s because if one accepts that human behavior is driving climate change they will have to change their behavior and: “Avi is paid to represent Flatbush-style and Hasidic style Judaism. Both styles of Judaism are all about conspicuous consumerism. Think McMansions, fat guts, ginormous lichters, thick fur hats, weddings for 500, and shabbos dinners that would satisfy a medium sized army. ”

What do you think drives Avi Shafran’s medieval mania?

Since I make it a habit to not needlessly raise my blood pressure, I don’t read Cross-Currents, therefore a H/T is in order to Fred MacDowell for posting this gem on Facebook.

In the event that the brave Cross-Currents team edits their original post, I’ve uploaded it here

Find out all the reasons Hashem disagrees with Avi Shafran at 4torah.com