On Rosh Hashana, which ran from September 25 to 26, The Body of Heavenly Hosts met for their annual executive session. 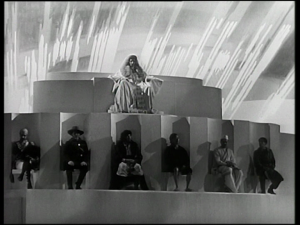 The following Heavenly Hosts were in attendance:

Michoel – angel of just about everything

Also in attendance were innumerable angels representing every individual Jew, whether they like it or not.

Approval of the Minutes

After discussion, upon a motion duly made and seconded, the Board approved the minutes of the September 5 – 6, 2013 executive session.

Report from the president and CEO

At 9:00:00 AM Hashem opened the meeting by thanking everyone for being prompt and reminding everyone that this is not a chassidishe shtieble where you can show up at leining and still be considered on time.

He then reported on activities in the field. He reminded everyone that while the situation in Israel has calmed down, it is still tenuous and he needs all hands on deck.  He said his best bet right now is getting those damn Hareidim into the army, this was plan B, to be sure, ten years ago he never would have considered it, but all those lazy secular Israelis have been running off to India and Florida and at this point he needed the Hareidim and this is what he’d have to resort to.

Hashem then talked about how proud he was of his askanim in Borough Park who just got a chassidish child molester out of jail, saying “I hate it when I see Jews locked up, Jews don’t belong in jail, I’ll punish them when I get my hands on them, the goyishe authorities have no business getting involved with my people”. Everyone agreed except Satan.

Satan proceeded to list every single headline of Failed Messiah’s from this past year, a total of roughly 2,484, as proof that Jews deserve to be wiped out once and for all.

All in attendance booed and Satan’s role as least favorite member of the executive committee was renewed.

Malach Michoel took the microphone at 9:00:07. He began by thanking Hashem for his update and said he looked forward to another year of accomplishments. Michoel’s presentation took up 8 pages in the board packet, he told everyone he didn’t want to keep them any longer than absolutely necessary, but 5774 years of experience told them otherwise.

Michoel talked about the number of kids Oorah saved from public school this year and said he hoped they would up their game, they were working way too slowly for his liking.

He praised the brave rabbis who braved world opinion and risked their careers to sit in the same room and around the same table as a bunch of OTD shkatzim to discuss how they can save others from following their lead.

He then turned his attention to the drafting situation in Eretz Yisrael that Hashem had opened with. He reiterated how volatile things are, how Satmar is about to emigrate to America or Switzerland, or somewhere, if something isn’t done soon, and Hashem knows we can’t have them leave Eretz Yisrael; after all their davening and learning single-handedly keeps the country afloat.

He then praised the Monsey population for finally making This American Life for standing up for themselves and taking over the school board. He said it’s a shame their good work had been buried in local papers for so long and he was proud of them for keeping it up long enough to get national coverage.

Michoel kept it up for-freaking-ever and people were beginning to fall asleep and I couldn’t keep taking notes. Finally he was shouted down and he returned to his seat.

The angel in charge of distributing wealth ascended the stage with a weary step at 9:00:49 and delivered this brief statement:

“Hashem, and august members of the Heavenly Body, I know numbers are up from last year but please don’t think that this is good news; we have fallen way short of projections and things are pretty miserable on the ground. How can I do my job with such a tight budget?”

And he requested an increase of $1,000,000,000 USD to be distributed equally between American, Brazilian, European and Israeli Jews.

The whole crowd applauded, but no motions were made to take this to a vote and so he had to return to his seat without accomplishing anything.

Hashem closed the proceedings at 9:00:58 by thanking everyone for attending and being prompt about it so that he could get to his meal on time. He apologized to the individual angels for cutting the proceedings short and not listening to their individual testimony but said that next year they will schedule more time to hear from each of them.

He addressed Satan directly and said “listen old boy, I’m never getting rid of my Jews, they’re the only reason I keep this corporation running, I’d have retired to Mars long ago if it weren’t for them.”

We thank you all for coming and look forward to a busy year.

Find out more about Satan at 4torah.com

← The Kedusha Crisis
New Square *Really* Doesn’t Like Other Jews →