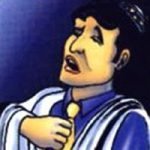 I used to like mussar, the self improvement stuff that gets you off your feet and makes you realize you’ve been a real shitty person your entire life. Great, make me feel like crap for having a short temper, not cleaving to the Lord, and thinking about the skatepark during krias hatorah. Mussar takes two of the most important things in Judaism, guilt and character development, and allows Rabbis to project their misgivings upon you. I used to love it, until it started getting a bit ridiculous.

I like learning about the dangers of slander, gossip, anger, and not being a cheerful dude. I really like smiling, it helps me change from that guy giving you the finger for going 70 in the carpool lane to a simple wave as I pass you on the right. What I don’t like are the moshels from the days of yore that basically prove that whole thing about the Jewish people spiraling down from the generations since sinai.

A nice fellow with a very large brimmed hat spoke during shalosh seudos this week. With reshus from the Rav he spoke about Ellul and how far our spiritual market value has been lowered since Mir in 1920. Apparently when the chazon would announce Ellul during birchas hachodesh in 1920, one would hear screaming from the Ezras Nushim and the women would faint. Obviously, my first thoughts went to nether world where all the women of Mir were having extra marital relationships with the local water carrier while their husbands shteiged away – hence the fainting – but this was not the case. “How could it be that just 90 years ago, women were fainting at the mere announcement of Ellul, and today we have no reaction?” Damned good question. Follow it up with a fairy tale about the son trading some of the kings jewels for some rice in some far off land or being able to ask the richest man in all the land for anything you want and that about sums up every Ellul shmuess I’ve ever heard.

I can tell you that the vecker in my yeshiva one year was genuinely concerned that we were sleeping in during slichos. After all, it was the best time to sleep in, who could pass up the chance to avoid those pesky Rabbis pulling off your covers because they wanted to do slichos? I never thought I’d have to hear the crying voice of “Rabbosai It’s Ellul” again, yet here I am in San Jose, California and it continues to haunt me whenever I wake up on time for shul.