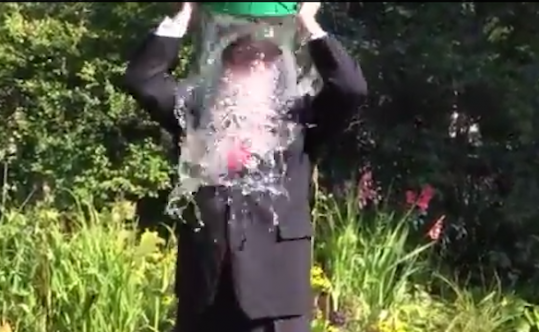 The so-called Ice Bucket Challenge or Nisayon D’li Kerach in halachic terms has brought the machle (illness) ALS (Amyotrophic Lateral Sclerosis) to the attention of Jew and gentile alike.

This time-honored minhag, referred to as ND”K from now on, was instituted in Chodesh Av 5774. However, our holy forefathers, zatsa”l, already knew the benefits of ice long before the Internet era.

Rav Saadiah Gaon would roll himself in the snow a thousand years ago in order to atone for his sins and do teshuvah. All the more so we, who are steeped in the sins of the 21st century and are entering the awe-inspiring month of Elul, should expose ourselves to the ND”K in order to cleanse ourselves from our impurity and impress our friends on Sefer Haponim (Facebook). As it says: “and I will pour upon you pure waters and you will be cleansed” (Ezekiel 36:25).

Below, I have outlined some shaayles that reached my desk with regards to ND”K. It is only a general guideline for study purposes. For practical guidance, especially if your 24 hours expire after 10 PM, please phone up your Local Orthodox Rabbi in the middle of the night, or send him a WhatsApp message (if you have a TAG filter in place, of course).

As far as halocha is concerned, size always matters. Halocha, at least in this instance, does not differentiate between men, animals, slaves or women.

Elderly people, women and other weaker creatures can be meikil (lenient) and insert 3 just ice cubes, in order to at least get a taste of the mitzvah (commandment).

The pasuk already says: ”Kol kevudah bas melech pnimah”, or: “The honor of a woman is inwards”. Still, it is allowed to expose the face of a woman (albeit not stare at it). Therefore, some people hold that it is allowed for women to be on Facebook (having the appropriate and approved filters in place).

Still, there are great tznius (modesty) risks associated to the ND”K. If a woman is not married yet, chas veshalom, the main concerns are that the water may expose curves that should not be exposed (by clothes shifting) and cause one’s clothes to become see-through. Even writing about this already causes my yetzer hora to cause me to say the beracha of zokeif kefufim (He who straightens that which is bent) so one needs to be careful!

The solution, of course, is to use multiple layers of clothing or to even add a layer of garbage bags. But some object to that because this may possibly look like we don’t value our nashim tzadkaniyos and cause an outrage by feminists and Internet blogs like Failed Messiah, yemach shemom vezichrom (may their names be blotted out).

In the case of married women, her hair must be covered at all times. To avoid the sheitel (wig) or snood to fall off, preferably, a paper bag should be put over her head lechatchila (a priori), but hair pins stuck to the scalp will do bedieved (a posteriori).

Some women prefer to perform the ND”K minhag in the dark. A picture taken by two male witnesses of the ice water beforehand and of the wet clothes afterwards could serve as reasonable proof. Some are machmir to send a video made with night vision goggles to their Rabbi and post a scan of his psak (legal ruling).

Maris Ayin or Keeping up Appearances

Men should keep their kipahs and tzitzis on at all times, as taking them off might inadvertently cause others to think that one is allowed to forget there is Someone above them or that there are moments that one is not obligated to think of the Taryag mitzvos, our 613 commandments, Hashem yishmor (G’d forbid).

Between man and his fellow man

Just like with mishloach manot (gifts handed out on the Jewish festival of Purim) men should only give to men and vice versa, so also with the ND”K men should only nominate men (and women should nominate women).

If, chas veshalom, a man nominates a woman that is not his wife, he should instead make a donation to the ALS foundation or my yeshiva, and then take a dip in the mikvah. May G’d protect him from any further nisyonos (ordeals).

Between husband and wife

If an eishes chayil was nominated, her husband can annul this nomination, just as he can annul any of her vows. Alternatively, and preferably, he should apply the principle of ‘Ishto kegufoh’ (‘a woman is like his own body’) and perform the ND”K for her instead.

If someone was nominated within 24 hours before Shabbos, there is a machlokes (difference of opinion) as to whether one could deduct the hours of Shabbos from the 24 hours or that one can only be yotzeh (fulfill his obligation) by giving tzedokah to the ALS foundation. Since a non-Jewish foundation is not the most worthy cause one could think of (a yeshiva like mine would be!), we pasken like the first opinion.

Careful: No ice should be touched during Shabbos as this may again be a case of maris ayin (awkward appearances).

The Month Of Elul

It’s a special mitzvah to nominate one’s friend during the month of Elul, as the name of Elul stands for “Ani Ledodi Vedodi Li”, meaning: “I am to my friend and my friend is to me”.

It is also an auspicious time to perform rituals that may drive out our enemies and provide a real ISIS Challenge, im yirtzeh Hashem.

Since the Beis Hamikdash was destroyed and we don’t have a Sanhedrin (Jewish Supreme Court) anymore, the following questions can only be clarified when the Messiah comes, speedily in our days:

We believe with perfect faith that these freezing / burning issues will all be explained by moshiach himself, right after resolving the issue of kitniyos for Ashkenazim and ordaining the first haredi female rabbi…

May Hashem save us and the whole Klal Yisroel from these machles (diseases like ALS, Aids and female rabbis) and visit them upon the umos haolam (the gentiles) and the goel tzidkeinu bimheira beyameinu, amen.

Learn more about the ALS ice bucket challenge at 4torah.com

← Blushing in Yeshiva
The Definitive Guide to Frum Cars →