Standing in the library at the local community college, a frum friend of mine was struck by the conversation she overheard behind her. 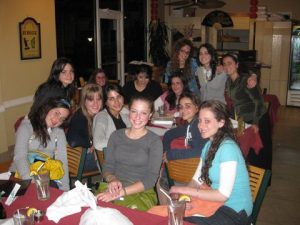 “Do you think Stacy’s hot?” One girl asked another.

“I think so,” replied the second.

“I think she’s ugly,” said the first, “would you sleep with her?”

“Yeah, I would sleep with her,” answered the second, “she’s smoking hot”.

“But that would mean that you’re gay,” said the first, “are you gay?”

My friend does not look forward to spending the next two years in this environment, “I don’t want to hang out with such lowlifes,” she told me.

I told her not to despair. Coming from the frum community she should be used to this kind of talk. We don’t have to go further back than yesterday afternoon, when sitting on the Monsey-bound bus, I overheard a chassidish woman behind me talking on her cellphone in Yiddish. A girl she knew, let’s call her Feiga, was sleeping with someone else she also knew. And last week Feiga slept with someone else, a married man. “Nuch a mazel zi iz nisht in Footsteps, Footsteps iz fill mit azeleche mentchen,” she ended off, with a tone of audible relief.

Not four weeks ago, as the summer zman was winding down in Lakewood, R’ Matisyahu Salomon, the mashgiach, spoke on the topic of tznius. R’ Matisyahu said that young men could get aroused from just seeing a stray collarbone on girls over the age of bas mitzvah. We have to guard ourselves from seeing women briskly walking around in bungalow colonies, he said, lest we become aroused and unable to sleep until we take matters into our own hands. He told us to remind our wives not to pull their sleeves above their wrists because their beautiful arms are reserved for the bedroom. They should not be the subject of a repressed yeshiva boy’s lustful ogling.

If I go back to my yeshiva days….but I stopped myself there, that was quite enough; this is about my friend, so I didn’t want to go there. It’s good to stay on topic.

I invited her to share some sample veiled sex shmuessen from her school days. I wanted to hear her repeat the reasons she was given for keeping tzniusdik, how she was a delicate flower that couldn’t sit in the same side of the shul as the rapacious, covetous, and vulgar men. But she declined. It was obvious to her by now that she could attend community college without blushing.

Find out more about tzniusdig sex at 4torah.com

10 comments for “Blushing in Yeshiva”