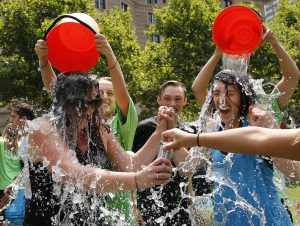 The internet is abuzz with the ALS Ice Bucket Challenge – everyone’s got an opinion on it, everyone knows they can find a way to show off their skills while having cold water dumped on their heads, everyone’s passing on the challenge to someone more choshuv than themselves in a bid to raise their social chashivus. And that’s all good, that’s how social philanthropy works.

As you can see from my Facebook profile picture I am perpetually glued to my gemarah so I don’t have time for these social challenges, but I’m reminded of the time I had a cup of freezing cold water poured over my sleeping head.

You see I didn’t become a masmid recently, I’ve been this way since tenth grade. Back in tenth grade while we were learning the first three blatt of Bava Kamma ad nauseam I, and a good friend, were busy trying to finish the mesechta. It was the winter zman and a leap year, so we had an extra month in which to finish it. During the morning shiur where the magid shiur was trying to make sense of a shtickle Pnei Yehoishua and Mafteach L’Talmud I was quickly learning Shor Shenagach Daled V’hay (the 4th perek). During night seder I zoomed ahead and finished Hagozel U’machil (the 10th perek), on Shabbos afternoons I was learning Perek Merubah (the 7th perek) and at 5:30 AM I would learn with my friend Dovid. First we finished the parts of Hogozel Eitzim (the 9th perek) that the yeshiva didn’t cover during seder and then we spent that time doing chazarah on stuff we had learned at other times.

One night we were both up very late watching a movie in our secret hideout. It was early morning by the time were were ready to go to sleep and I was afraid that if I went to sleep I wouldn’t be able to wake up at 5:30, but I didn’t want to stay up all night because I knew I wouldn’t be able to learn that day if I did. Dovid had a little contraption he had built on the wall above his pillow; it was a little pulley connected to his alarm clock that would tip a cup of water onto his head. He needed a silent alarm clock so he wouldn’t wake up all his roommates, but he needed one that would be powerful enough to wake him up. It worked every time, he was always up on time.

Dovid said he’d stay up the rest of the night and offered me his bed, he said he’d set up the water clock to wake me up at 5:30 and I’d meet him in the beis medrish afterwards. I lay down in his bed and fell promptly into a deep sleep, I was exhausted.

I know what waterboarding feels like and I sympathize with all those Guantanamo Bay terrorists; I was suddenly awake feeling like I was drowning! That bastard had filled a 12 ounce cup to the brim and stood outside his door laughing his head off while I bolted up gagging and trying to catch my breath. And like Mark Zuckerberg, who simply turned around and said “that was really cold” and walked off like he’d just eaten a chocolate chip cookie, I got up and did chazarah on Keitzad Haregel (2nd perek).

And now that I’ve heroically completed my challenge for the sake of toireh, I challenge America’s Rabbi, Rabbi Shmuley Boteach, The Internet Rabbi, Rabbi Eliyahu Fink and the Frum Satire Rabbi, Rabbi Heshy Fried to complete the challenge or pony up $100.