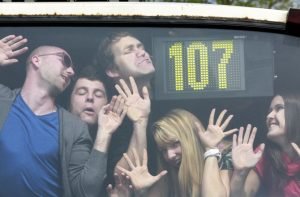 I got in line early so I can get a seat toward the front of the bus, because a year of bus commuting has taught me that people board the bus, see all the partially occupied seats and continue rearward hoping to find an empty seat, and even if they don’t find one they settle back there rather than turn around and return to the front.

I got the forward seat I wanted and hoped that the bus wouldn’t fill up to the point where I’d have to share my seat with another person. They’re called coach buses because their seats are smaller than coach seats on airplanes. I once witnessed a rather overweight fellow who was comfortably spread out in the seat I wanted to sit share with him, as I moved to sit down next to him he was contracted himself into his seat. He didn’t move, he didn’t shift, he didn’t squeeze himself; he just contracted himself. Amazing.

The line getting onto the bus extends about a mile down the Port Authority terminal and the bus is filling up. I see people hesitating as they board, quickly assessing their options before cautiously moving inward and making the difficult choice of seatmate for the hour-and-forty-five-minute-without-traffic-ride.

Now I see people going to the back of the bus then coming back, the bus is filling up, but they’re not choosing my seat; they look around in ill-concealed panic and settle on the seat with the fat lady, the sweaty fat guy, the nervous-looking kid with the loud music coming out of his iPod and the alter kocker who’ll chew their ear off all the way there. But they’re not choosing my seat.
I asses myself; “I shaved last night, I took a shower, my shirt’s not tucked in so I don’t look like an old fashion square, I’m discretely chewing mint gum which should tell them that even if I do have horse-breath they won’t have to suffer from it, I put my backpack on the floor in front of me and I took the window seat, unlike those others who take the aisle seat, put all their shit on the seat next to them and have that look of nonchalant hostility.”

“Wait!” I caught myself, “why do I suddenly want someone to sit next to me? I don’t, so stop looking so welcoming.”

Oh great, here comes someone. Well at least she looks clean and neat, should be bearable. She sits down but immediately looks behind her and shortly gets up and relocates. What?? What did I do? Did I smile too eagerly? Did I ignore her too adamantly?

It’s been hours of this agony, but finally the bus pulls out and I put them all behind me, I stretch out a little and enjoy my liberty while feeling sorry for all those suckers who have to squeeze themselves into their miserly side of the seat.

The bus leaves Port Authority and pulls into the first stop. No one gets off, one person gets on; he stops abruptly after passing my seat, turns and gestures curtly for me to limit myself to my half of the seat. Damn!

He sits down and I smell the cigarette he just flicked to the ground. As he settles into the seat I smell the last fifteen cigarettes he smoked in past four hours.

Shit! I should have gone to the back of the bus. A year of commuting hasn’t taught me anything.