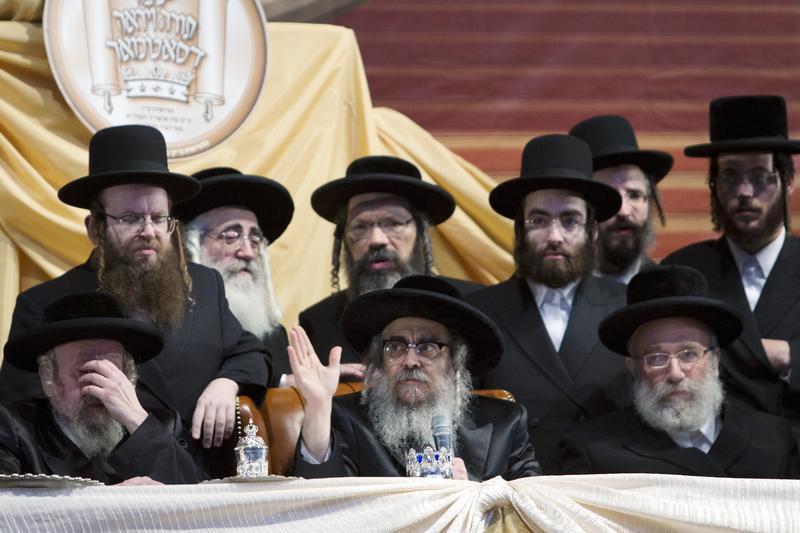 R’ Joel Teitelbaum spearheaded modern anti-Zionism, which is still alive today among some cave-dwellers, most notably in the groups led by his two great-nephews. The two nephews take time out of their weekly litigation schedules, where they’re locked in battle over who gets the title of chief caveman,  to attack Zionism in the tradition handed down to them by their uncle.  Who, having no brother to battle in court, had more time in his day for anti-Zionist rants. Toward the end of his life R’ Joel wrote a Der Yid paperback bestseller called Mein Kampf Gegen den Zionismus where he outlined his vision for a utopian Jewish future where all Jews would leave Israel and move to his new enclave in Monroe, NY.

But earlier this week, nephew Aron Teitelbaum minimized all of his uncle’s hard work by reducing the sin of Zionism. While the Jewish world mourns the murder of three Israeli teens, the Aroini faction of Satmar mourns its chief’s shockingly lowered standards.

In a speech earlier this week, Chief Aron said that it is only a sin to live in the Israeli settlements because of the danger posed by “predatory animals” that roam the region. However, he implied that it is no violation of Mein Kampf to live in other parts of Israel that are settled by secular Israelis, non-Jews, and even Zionists!

In a clear departure from his fiery uncle and dogmatic brother, who maintained that the state of Israel is not protected by the evil Zionists but  by Hashem (and is in fact put in danger by the Zionists and their military) Chief Aron mellowed  his anti-Zionist rhetoric. He said  that even learning Torah cannot protect those living among Arabs, suggesting a distinction between those living in Israeli settlements and those living in Israel proper . He hinted at his reductionist philosophy by saying “[the murder] is all because of the yetzer hara and the desire for Jews to inhabit the entire State of Israel.  It is Zionism, mehadrin min hamehadrin.”

This was taken by insiders to mean that living under Zionist rule and enjoying its protection is no longer prohibited by caveman rules.

As of this reporting, hordes of Aroini cavemen are escaping their utopian Monroe dwellings to live in Tel Aviv, Haifa, and other popular Israeli cities. The Zali cavemen, who never abandoned their urban caves for the suburban Monroe ones, are rejoicing in their rival tribe’s  loss of honor.