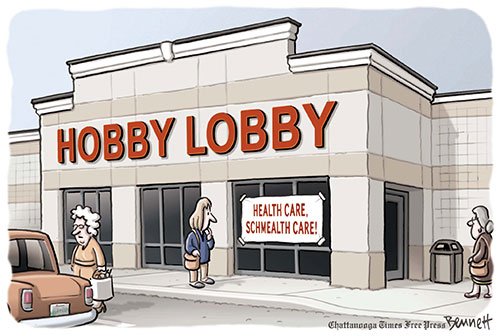 In the three years since the Supreme Court’s decision to allow Hobby Lobby to exempt itself from including contraceptive coverage for its employees, based on their professed religious beliefs, closely held Jewish corporations have used the court’s logic to allow themselves to steal from non-Jewish employees, stop paying sales tax, stop the paying FICA taxes they withhold from their employees’ paychecks and to stop reporting their incomes to the IRS altogether.

In a case that is widely expected to reach the Supreme Court, Goldie’s Scrumptious?Delight argues that it should be allowed to take small change and iPods from employees’ pockets in the changing room. The local Brooklyn specialty shop, which makes cakes and pastries for over-the-top weddings and bar mitzvahs for the discriminating kosher consumer, has had the police called by irate employees multiple times over the past three years. In lower courts the kosher pilfering shop has argued that while most medieval halachik commentators agree that stealing from non-Jews is not allowed, some commentators have allowed it and this is their strongly held religious beliefs and the courts have no right to impinge on them.

In another case in Flatbush NY Tirtza’s Tznius-but-Classy Fashionwear had stopped paying sales tax after the Supreme Court’s decision, arguing that the government’s use of funds collected through sale’s tax go against their deeply held religious beliefs. In a statement to the Yated on July 20th 2014 Tirtza’s co-owner Genendel Feldman said “We would never build parks where goyim could go play basketball and act like vilde chayess, Moishe Rabbainu would never do it, so why are we paying the government to do it?”

In a recent decision in Manhattan district court the state found against Tirtza’s Tznius-but Classy Fashionwear on the grounds that Genendel’s grandson had been photographed at Bobov’s Camp Shalva where the boys play basketball once a summer.

Moishe’s Discount Yarmulkas and Tzitzis was audited by the IRS for failing to file timely quarterly taxes, the audit revealed that Moishe’s had been withholding social security and medicare taxes from its employees as required by law, but they hadn’t been making payments to the IRS.

In court Moishe’s owner Yankel Fefferkorn argued that while he has no objection to withholding the taxes, his deeply held religious convictions do not allow him to pay into the ponzi-like social security system because it is a form of gambling and thus he cannot in good faith make those payments. He offered an out of court settlement wherein he would stop spending the withheld funds on his monthly date night with his wife and instead start an investment fund for his employees’ retirement which he would manage. An IRS representative is quoted as saying “that’s ridiculous!”.

This case too may end up in the Supreme Court.

And finally there’s the curious case of Yum Mee Glatt, a kosher Chinese restaurant in Monsey NY. The owners of Yum Mee have stopped reporting their employees’ incomes altogether on the grounds that their employees have, in the past, been kicked off government programs to which they feel they are entitled based on their strongly held religious beliefs which force them to send their kids to yeshiva and live in expensive neighborhoods.

In this widely discussed case, legal experts feel that the court will grant Yum Mee Glatt their request.

Find out more about frum tax reporting on 4totah.com