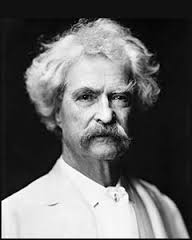 Aish, as well as the pedophile Shmuel Waldman in his book Beyond a Reasonable Doubt, seem to revel in the fact that Mark Twain recognized the Jew’s uniqueness. It’s a pathetic sight to see them spill so much ink over the question of Mark Twain’s opinion on Jews.

So can we get a show of hands? How many of you have read the entire essay Concerning the Jews? Beyond the standard trope that the Jew has outlived the Egyptian, the Babylonian, the Roman etc. has anyone read the rest of it? I don’t think you’d satisfy yourself with reading the last three paragraphs of Huckleberry Finn and skip the part about the King and Duke getting tar and feathered, would you? Neither should you deny yourself the pleasure of reading the entire essay. Take, for example, this:

“The Jew is not a burden on the charities of the state nor of the city; these could cease from their functions without affecting him.”

This was on the “credit side” of Twain’s equation.

“I call to mind Genesis, chapter xlvii. We have all thoughtfully – or unthoughtfully – read the pathetic story of the years of plenty and the years of famine in Egypt, and how Joseph, with that opportunity, made a corner in broken hearts, and the crusts of the poor, and human liberty – a corner whereby he took a nation’s money all away, to the last penny; took a nation’s livestock all away, to the last hoof; took a nation’s land away, to the last acre; then took the nation itself, buying it for bread, man by man, woman by woman, child by child, till all were slaves; a corner which took everything, left nothing; a corner so stupendous that, by comparison with it, the most gigantic corners in subsequent history are but baby things, for it dealt in hundreds of millions of bushels, and its profits were reckonable by hundreds of millions of dollars, and it was a disaster so crushing that its effects have not wholly disappeared from Egypt to-day, more than three thousand years after the event.

Is it presumable that the eye of Egypt was upon Joseph the foreign Jew all this time? I think it likely. Was it friendly? We must doubt it. Was Joseph establishing a character for his race which would survive long in Egypt? and in time would his name come to be familiarly used to express that character – like Shylock’s? It is hardly to be doubted.”

And finally there’s this from his notebook on his trip to the Middle East:

“We are glad to have seen Egypt. We are glad to have seen that old land which taught Greece her letters — and through Greece, Rome — and through Rome, the world — that venerable cradle of culture and refinement which could have humanized and civilized the Children of Israel, but allowed them to depart out of her borders savages — those Children whom we still revere, still love, and whose sad shortcomings we still excuse — not because they were savages, but because they were the chosen savages of God.”

So I say that if you care about famous people’s opinion on Jews, find someone less insightful and honest than Mark Twain to draw your sagging national pride from.

Find out more about Mark Twain, Aish and Jews on 4torah.com

8 comments for “Concerning Mark Twain’s Opinion on the Jews”