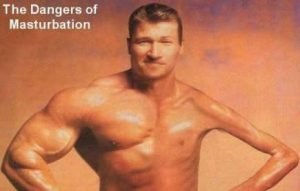 It was well after lights out, but Yankel still had his blankets folded strategically to hide his erection. Today was twenty two days since he had last masturbated, and he was feeling very tempted to break his streak. He was held back by his sense of achievement; it was after all, a fair accomplishment to have gone for so long without giving into his temptations. And Yankel knew it was wrong, he knew how it sundered his connection with his Creator every time he wasted his life-giving seed. Furthermore, anything which provided only pleasure with no purpose was evil, and Yankel was well versed in that regard. But he has been so good, it had been so long since he’d indulged, surely he deserved a reward, he had earned it… He felt a throb from his groin, and the familiar longings rushed back to him. His pulse quickened.

Slowly, stealthily, he swung his feet off his bed and onto the floor. His movements were automatic, on autopilot. His mind was numb, his body in full control. He grabbed a towel from the hanging rack and slipped into the bathroom, locking it with a muted click. Soon the shower water was hot and steaming, and Yankel stood in the middle of the bathroom, his clothes in a mess around his feet, his penis in his hand. By now his mind had woken up in protest, but it was far too late.

He stepped into the shower, almost instantly adapting to the hot water, and grabbed the softest shampoo on the shelf. Lathering gently at first, then rubbing in earnest, he felt three weeks of sexual frustration bubble up inside of him. Somewhere, his soul was screaming at him to stop, how he was doing something so terrible and innately wrong, but the monstrous animal within him was roaring triumphantly. Seconds later, it was all over. Jets of white liquid streamed out of his body in salvos, short bursts that he tried hastily to aim at the drain. Knees bent slightly, he let out a soft groan, once again conscious of his sleeping dormmates. And under the steady spray of the shower, his organ still dripping, Yankel cried. The feelings of remorse were instantaneous and cruel. The monster within him was gone completely, having gotten what it wanted. His mind was back in full force, with renewed authority. He stared at his own body, repulsed at what he had done. He had just defiled his sacred covenant with God, the ring of circumcised flesh as visible as ever. And his streak of abstinence, gone to waste. He was a disgusting creature, the worst of the worst, with no self-control. He let the shower go freezing cold, then too hot. Bitter tears mixed with the shower water until they stopped completely. Two minutes of self-beration later, Yankel shut the water. He dried himself and dressed in the clothes that he had strewn carelessly on the floor. He gently eased the door open, and got back into bed.

He had just showered, but he felt dirty, as unclean as ever, the cloying scent of the shampoo he’d used wafting up his nostrils and suffocating him with guilt. Tomorrow, how could he face anyone? They’d never know, but he would. How could he go to mikvah in the morning, walking naked among the more pious students who had an actual ounce of control over their physical desires? How could he wear tefillin, using the same hand which committed the sin to wrap the leather straps? How would God hear his prayers in the morning, coming from so lowly a creature, worse than the filthiest worm? And with each thought, he sank deeper and deeper into a dark and tormented sleep, from which he awoke grimly resolved to destroy his evil inclination once and for all.