Being a member in good standing of the OTD community, as well as a member in poor standing in the frum community, I have a right, and a duty, to the Frum Satire community, which has no standing in either community, to give my unbiased, unvarnished opinion on the recent historical summit which took place in Monsey while Heshy was hanging out in Far Rockaway refusing to visit me. 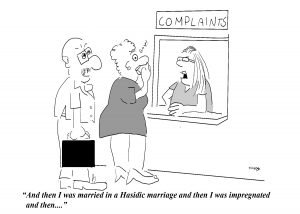 Turns out that a Frum Satire alumnus, Rabbi Eliyahu Fink, worked hard to get together a very diverse group of people, a group of people who would normally not get within striking distance of each other for fear that they would strike each other. No one knows what went on there because everyone in attendance signed a solemn oath not to repeat anything, they signed their names in blood and promised to sell their mothers down the river if they did say anything. Nevertheless some details have emerged and I want to focus on the mediums of their delivery.

First to talk about it was Rabbi Fink, he called it a groundbreaking meeting and earned himself the scorn of the very influential Facebook community.

Then there was Leah Vincent who wrote an article in the Forward about the sex she had and the rabbis she told about said sex, this too was groundbreaking.

Then there was Rabbi Ron Yitzchok Eisenman who wrote about the meeting in the space especially reserved for his short vort, which is interesting all on its own. He thought the meeting was not groundbreaking, nope, not at all, although the food was good, he made sure to point that out.

And finally there was Frieda Vizel. Frieda wrote about it on her own blog and it’s a good thing because until her post people were taking themselves way too damn seriously. Who had a full head of hair, who had a beard, who had a no hair and no beard? These things are important details which had been missing from the other narratives, but these are details which Frieda never misses.

The reason it’s on her own blog rather than in the stuffy Forward is because it’s a hilarious take on the whole summit, and like the rest of her blog, it isn’t pretentious or make claims of historical significance, she maintains that although the food was good – and even while the entire diverse group agreed that the chocolate rum balls and cookies with the swirl on top were excellent – even this wasn’t historical, it was merely a job done well by Mi Chicas Kosher Caterers and that happens at least twice a week.

The rest of her blog is worth checking out as well because Oy Vey Cartoons has been poking fun at the hasidic community, the OTD community and at its own author and chief illustrator. After the obligatory brouhaha over the summit died down, which in 2014 I think is about three hours, Rabbi Fink wrote a second post saying that the primary criteria for choosing the rabbis to attend the summit was their ability to be reflective and self-critical; I don’t know about any of the rabbis in attendance having that ability, least of all Rabbis Avital Chizhik and Avi Shafran, but Frieda Vizel has been hard at work putting herself down on her own blog for two and a half years and I think that’s an ingredient the OTD community can use more of in their cholent.

Go there now and submit your best cartoon caption and win a prize, some kind of prize, I’m not really clear on what it is but at least you’ll win internet fame for eternity, which in 2014 I think is 4 hours.

4 comments for “On the Rabbi/OTD Summit & Other Missives”