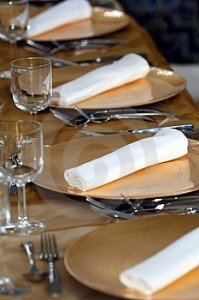 They didn’t know it then, but one of the people entering the banquet hall that night wouldn’t go home alive. Had they known it though it wouldn’t have changed anything, the world must go on, the yeshiva had a lot riding on this dinner, the scholarships they awarded their needy families were funded by this dinner.

Chaim wasn’t a scholar, he wasn’t an ignoramus though by any means, but he wasn’t either a rich person, nor was he poor enough to attract the sympathy of the many communal charity organizations; Chaim was a hardworking family man, with a family to support.

After his mounting financial pressures forced him to leave the local community kollel, Chaim found himself working at as an appliance salesman for a local frum-owned business. At first his increased pay made Chaim feel like a millionaire but when the school began to decrease his scholarship award, in ever-increasing bites, he began to feel poorer than he had before. With his new income he was now responsible for co-pays at every kid’s doctor appointment, there was no more food stamps, there was no parsonage deduction to reduce his federal income tax and now the school was demanding more for tuition. Something was going to have to give.

When he got the call asking why he hadn’t yet RSVPd for the school’s dinner his stomach constricted; he knew he was obligated to attend, it was right there in the tution contract, but he couldn’t. He couldn’t pay the utility bills, fix the broken exhaust pipe on his 14 year-old car, fill up the gas tank on his wife’s minivan and pay the $180 for the dinner. Not to worry, the administrator said, you can pay with a credit card. “The credit card”, thought Chaim, “they have no sympathy for the credit card, the damn thing is already carrying $32,000 on its shoulders more than it can handle”.  But with no choice another $180 was added to the balance.

As he settled into his assigned seat Chaim surveyed the floral arrangements, table runners, crystal glasses, and ice sculptures and wondered why all this effort was necessary to extract another few hundred dollars from people who were already giving as much as they could to the school; couldn’t they simply solicit the money directly and skip the dinner?

As the dean of the school walked up to deliver his poorly-prepared speech, which was a repeat of last year’s poorly-prepared speech, Chaim felt his chest tighten; he couldn’t sit through another one of these speeches, he couldn’t clap afterwards and he couldn’t sit through the five self-congratulatory speeches that would follow the first. There was the honoree who was going to humbly suggest that he didn’t deserve the honor, then there would be the alumnus of the year who would humbly claim to not have achieved any of the great achievements attributed to him and then there would be the visiting rosh yeshiva who would give another speech reminding everyone how important a Torah education was for the survival of the Jewish nation.

Chaim had reached the limit of his tolerance for the pain. He stood up and walked quickly toward the exit, hoping no one of consequence would notice his leaving. He almost lost his footing as his chest tightened again, but he quickened his pace as the dean began his speech.

Standing in the parking lot, smoking a cigarette Chaim felt trapped. Is this what debtor’s prison was like? There was no give anywhere he looked, he had no options as his chest spasmmed again, the cigarette fell from his hand as he grabbed his chest. Leaning over against the hood of a car he wondered whether anyone would find him as he realized that it was his heart that would give.

← Is killing a cow for food, better than having sex with it?
10 most common Gadol stories →

21 comments for “Give One More for the Yeshiva”