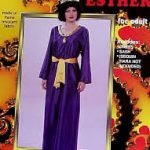 One would think that my favorite holiday is Purim, but sadly it isn’t. In fact, Purim is one of my least favorite holidays. I don’t like the long drawn out readings of the megillah, I hate going to communal purim meals with a bunch of kids, and I hate having to scramble together shalach manos for people you don’t even allow in your house. So this year I decided to get inebriated for the megillah, I figured that my regular hyperactivity would be calmed down enough to get through the megillah without walking out or thinking about how many words I was missing the entire time. Basically, for the first time in my life I didn’t suffer from megillah attention deficit disorder. It was a very jubilant experience, I was so gone that I started to read the megillah on its own, sans commentary for the first time ever. It blew my mind.

Whenever I read Megillas Esther, I don’t read it literal, I read it with the additions of every Purim story I’ve heard since I was a kid. The megillah may not say it, but when I read the megillah, Vashti has a terrible case of Chicken Pox and grows a tale. Esther is super tznius and Mordechai paskens for himself on the heter of Esthers Honey Pot Mission.

Reading the megillah literally is dangerous, because the story becomes a modern one of sex, power, and betrayal. It’s a quite good story without the commentary and it still makes sense, in fact the story makes the Jews look pretty shitty. The purim stories of my youth never mentioned that Achashverosh like the goyishe version of Dovid Hamelech who had a different girl for every night and never had to deal with harchakos.

Tonight’s literal reading made me wonder how Purim is even allowed nowadays, it’s terribly untznius, and if you take the favorable commentary out, it makes the Jews look like vengeful MFers.

Here’s my sum of the story based on my inebriated reading (and writing for that matter).

Achashverosh is a narcissistic pig who has a huge party to show off his shit, he’s also sexist and a fan of gender inequality because he forces his Queen Vashti to have a separate party (some poskim hold that this proves the theory that the farther you get from Sinai the more immoral we get – showing that even the goyim separated the sexes)  Queen Vashti was pissed at her man and refused to objectify herself in front of a bunch of dudes. Ahcashverosh was cool, but his henchman wanted some action so they convinced him to banish her and get him to have a beauty pageant. Unlike the beauty pageants of today, the beauty pageants of yore required sex with the judge (nowadays that may go on behind scenes) Some feminists claim that Achashverosh raped these women in the beauty pageant, I doubt it was assur at the time.

In the meantime, one of the rising stars of the kings court is Haman (at this point in my literal reading, I should mention that it is the custom of the Orthodox world to cheer for this man whenever he is mentioned during the long drawn out reading) and Haman isn’t happy about the hook nosed heeb who hangs out by the gates because he’s into palace gossip. We don’t know much about Mordechai except for the fact that he overhears a plot against the king and that his adopted daughter is a hottie (in megillah terminology she was finely featured) The king forgets about Mordechai’s good deed and that story is put on hold. In the meantime he decides to enter Esther into the beauty pageant in order that she may become the queen. It doesn’t mention anything other than her entering the harem and having to anoint herself for many months, until the smell of not showering in a desert environment can be covered up. Then she is taken to sleep with the king.

At this point in my reading, I couldn’t stop thinking about how awkward that might be. Kind of like mikvah night when you’re 17 and just met your wife. Something about being forced to perform in bed for money (or the former queens estate) sounds like something that would have been erased out of the story back in the day or at least during the Mussar movement.

So Esther is super hot in the sack and she wins the pageant. The king still gets a different woman for every night of the week, but Esther is considered Queen and gets to kiss the Kings Scepter (which in my state of mind, became something about sex) In the meantime, Haman wants to kill the Jews and Esther saves the day by promoted intermarriage in order to do the mitzvah of saving Jewish life. Or do hot women willing to have sex with goyim to save the Jews make more sense? I’m not sure, but when you start really concentrating, you realize how awesome the Purim story would be on the big screen.

Come to think of it, if the Rabbi ever really think about in a constructive manner, the holiday may be banned. The least they could is ban Queen Esther costumes, which in my view promote intermarriage, prostitution, and gambling.