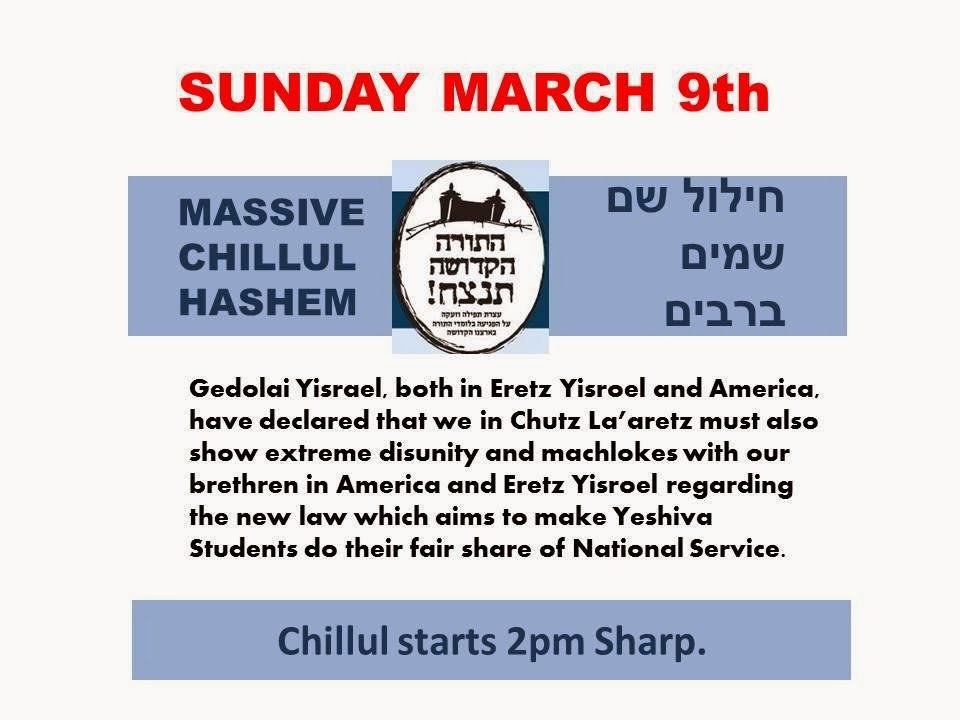 In my mind it seems to be a cut and dry issue, a country that is constantly on the brink of war and destruction at the hands of the Arabs surrounding them needs to have a draft in order to protect itself. Everyone, save for a few schmucks who are draft dodgers should serve, right? I remember when I first heard the sad fact that “not all Orthodox Jews supported Israel” it was a weird thing to hear, I first heard those lines when I was in yeshiva. I remember wonder how they could get exemptions by merely sitting in yeshiva and I was told time and time again that the yeshiva world believed that the IDF was only successful in their endeavors because of the yeshiva guys.

It made no sense at the time to me and it still doesn’t. However, I don’t want to be another self hating blogger to just jump on the bandwagon of charedi hating. I want to love my fellow Jews, I seek to understand this whole debate that seems to be tearing us apart.

The debate seems to have been raging for years, pick up any book about the shtetl days of yore and you will see countless stories of the pre-war gedolim closing down yeshivas rather than allowing secular education and getting their students to flea the area in order to avoid being drafted into the army. The extreme religious views that we see with regards to this draft debate are nothing new. It is just odd as heck to be protesting against a Jewish state of all things. A state which lets you practice your religion in peace, but peace isn’t free. Peace comes at a price and in this situation it requires that young folks do their fare share.

Now what I want is for someone to make me see the light and love my fellow brothers and sisters again. I want someone to inform me that I’m just a hater and I need to see that Hashem expects all of those charedim to be in yeshiva, out of the army, and protesting things that matter like closing stores on shabbos and getting the gays out of Jerusalem.

Or is it just another debatable chillul hashem?

76 comments for “Do you think Israel should force the Charedim to serve in the army?”