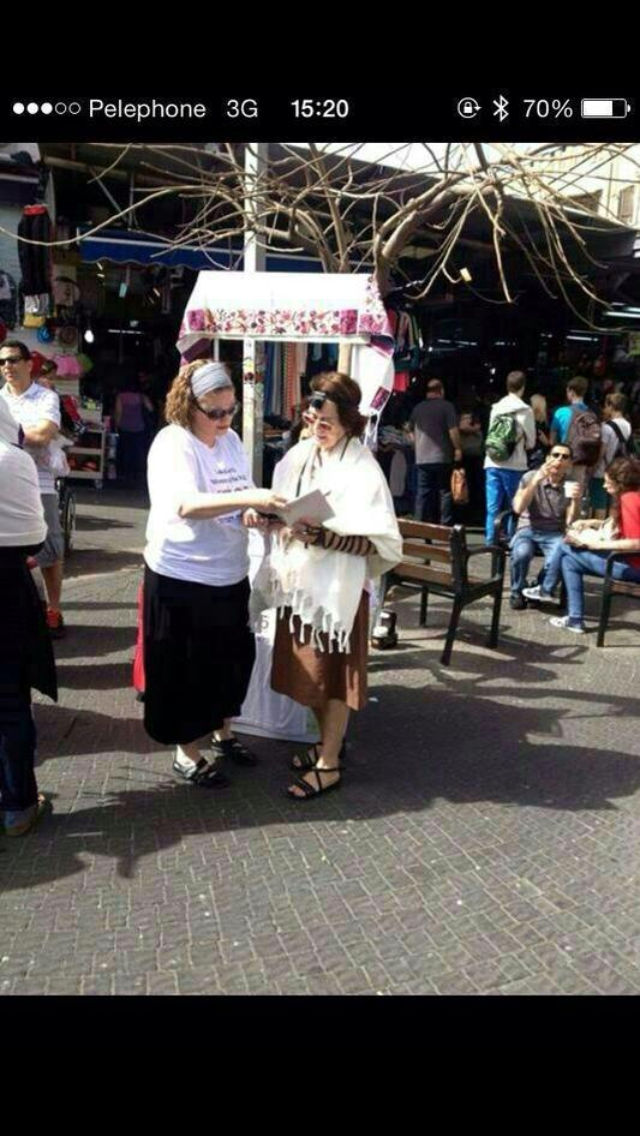 One of the biggest complaints that the Orthodox Jewish world has against chabad is that they are too open minded with regards to the roles of women. No other group within ultra-orthodoxy (we can argue all day along about whether we consider them ultra orthodox, but the general population considers them such) allows women as much freedom and intellectual learning as chabad. Chabad women are often educated in both Torah and Secular knowledge and they are also encouraged to learn gemara and develop divrei Torah. Now, some chabad women are looking at tefillin as a new way to reach out to their less observant sisters.

Chabad is known for its unique methods of outreach and one of those methods is for men to approach other men and ask them to lay tefillin in random places, offices, and in the middle of the street. For many years, their wives have done the same thing by asking women to light shabbos candles, worship their husbands, and visit the mikvah to sanctify their illicit sexual relationships.

As the saying goes “give them an inch and they’ll take a mile” chabad women have begun to get jealous of their sons, husbands, and fathers for their outreach. With more women laying tefillin than ever before, it’s become less of a horror for women to expose their upper arms in the street and devote a few minutes to some shema yisrael bondage.

It appears that the new trend is most likely favored by the hassidic hipster movement within Crown Heights that seeks to blend modernity and chassidism in ways never seen before. In an effort to rationalize the irrationality of their mysticism they’ve begun to look towards other left wing movements as a way to revolutionize kiruv.

For too many years kiruv has been about the men. Although many point to the women as the backbone of men, most kiruv efforts have focused on the men because they are seen as better funders to perpetuate the kiruv industry. How mainstream chabad will react to this new method of mivtzayom is hard to know, but I think chabad is going through a bit of a disenfranchisement itself.

← Shalach Manos databases other abuses of Purim.
Do you think Israel should force the Charedim to serve in the army? →