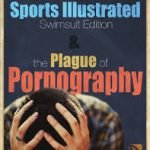 There were only about 5 magazines that we could actually subscribe to in yeshiva, Sports Illustrated was one of them. One of the jobs of the secretary was to filter out any pritzus that would wind up in our legal magazines. This included any slips of paper reminding us that our dream issue was coming. Every once in a while, the secretary missed one of these reminders and that slip of paper was folded and unfolded hundreds of times as it made its way around the school. It was more coveted than any porn magazine, because it was technically allowed to slip into the school after careful scrutiny. As if the secretaries allowed us a little more action than the JC Penny underwear ads, because they felt bad for a bunch of horned up yeshiva guys with no girls to ease our pain.

I never saw it happen, but I heard about the swimsuit issue slipping through unnoticed, I don’t believe the story – but yeshiva urban legends are one of the things that can get you through an especially long shabbos afternoon. However, I do remember going to the library and tearing out pages for future use. It seemed that I wasn’t the only one who did such acts of thievery, because there were usually very few pages to choose from. It was also common practice to take the swimsuit issue into the library bathroom for some alone time.

The funny thing about it all is the fact that since I left yeshiva I never looked at the swimsuit issue again, it’s too fancy, too fake, and the same price as hustler.

← Put on tefillin
Shalach Manos databases other abuses of Purim. →