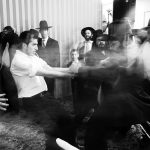 I heard recently that one of the members of my shul, who I’ve known for years is a heavily into gardening, a bit of a fascination of my own. Then I learned that another fellow is into modifying trucks and off roading. I was a bit shocked at these revelations and it made me realize that I don’t know anything about the people in my community. Besides for the 4 or 5 families that my wife and I regularly eat by, I don’t know what hobbies, interests, talents, or passions that most people in the shul/community have. It’s occurred to me that I live in a frum community where I don’t actually know anyone deeper than our weekly gut shabbos handshake.

In larger communities, life doesn’t revolve around shul, in ours it does. Women come to shul at times when regular communities tend to have empty women’s sections. Friday night, shabbos afternoon, and there’s even a full regimen of women at shaloshudos – a rarity in my experiences. Yet, we don’t have restaurants (save for one) and we only have one hole in the wall grocery store with barely enough room for a minyan of folks shopping at once. I’m sure the mothers chat as they pick their kids up from the day school and I say my required hellos as I’m rushing out of maariv, but I don’t actually know anyone in my community.

In fact, I’m sorry to say that I’m an extroverted guy, yet there are a number of folks that I’ve never even spoken to – including the very serious guy who sits in front of me. I find these facts all the more interesting considering the fact that the community I live in is known as a hachnasos orchim kind of place. The kind of place where you call up for shabbos meals and when you say you’re staying at a hotel, they beg you to stay in the community. Yet, with all this hachnasos orchim, which means people are friendly, I still don’t know what kind of music anyone listens to, or what their political views are. I don’t even know who’s a democrat or republican, because people don’t talk politics at their shabbos tables.

This has been troubling me more often than not, because I’m trying to figure out the demographics of the shul in a deeper way beyond the amount of black hats and people who wear shabbos clothing on the weekdays (about 30%). Just because you wear a black hat, doesn’t mean you don’t watch TV and go mixed swimming. I need to know such factoids in order to properly market my community over the others that we compete with in the area.

Am I alone, or are most people in the same boat – spending years in the same community – yet knowing nothing about those people you spend it with. Rcently someone came up to me whom I’ve known for years and told me that he never knew about my online persona, he said that someone sent him a video that he liked and realized afterward that it was me.

Granted, it would help if the shul had more non-learning events or shabbosim where they forced people to invite others they never had over to their homes. Some of the people I’m curious about, have invited us once and never again (I’m beginning to wonder about that fact as well) but still, if I’m going to settle in some place, I want to know if there are anymore people I can get a beer a with. As of now, there are about 6 people that I would enjoy drinking beer in a stingy bar with – I’d love to expand that number a bit.

37 comments for “Do you actually know the people in your community?”