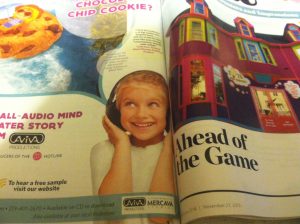 My family and I read your magazine on a daily basis, we get them as hand me downs because the subscription is quite pricey and since we live out of town, the old news is never really that old. We enjoy the advertisements for upscale apartments in Yerushalyim, the kosher vitamins, and the yeshiva dinners. Along with readers digest, consumer reports, it is the only secular periodical allowed into our home. I wanted to say that I love Mishpacha Magazine, I love that you provide such intellectual, superb writing on a variety of issues in a fair and balanced way. I rarely see any bias and I rarely see anything that rubs me the wrong way and that’s why I decided to write to you.

I was settling into the November 27th 2013 issue when I noticed something that made me choke on my tea sense. On page 98 there is an ad that features an untznius girl showing her elbows. Not only was the first time I’ve ever seen a female in any of your publications, but I can’t remember the last time I frum publication was so careless as to include an untznius girl which could clearly lead to hirhurim. Baruch Hashem my husband doesn’t like underage girls, but many of his colleagues in chinuch struggle with this taiva and almost everyone we know reads mishpacha.

Do you realize the repercussions that this ad may have caused. We are not the only family that gets hand me down copies of your magazine and most of those families are those who are involved in chinuch. The amount of thoughts caused by this ervah are unknown to us, but it’s doubtful that you can ever take back all of the zera livatala, broken marriages, and evil thoughts.

I searched around the internet to see if anyone has complained and there are none. Does this mean that this advertisement is still up? Has no one in your editorial department scanned for breaches in tznius. You are so quick to prevent women from being in your magazines, but you have been lax in the children department. The halachos are similar, a single man cannot be in yichud with this girl and she is required to cover her ervah, which she clearly did not in her ad.

Shame on Mishpacha for misleading our husbands, sons, and men with their lewd advertisements.

← Is your chabad preschool run by meshichists?
Yeshiva University grants semicha and loses its self respect →