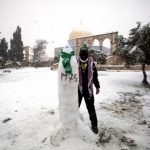 I don’t write much about Israel because it’s one of those heated debates that never seems to change or end. There are very few moderates, either you want to push the Arabs into the sea or you want to force the Jews into the sea. I’ve not met too many centrists or folks who don’t have a viewpoint on Israel, it’s an impassioned personal debate that gets a lot of attention and zero progress. However, I have been watching the debate over whether or not the Ramaz political society should allow a pro-Palestinian professor at Columbia (Rashid Khalidi) to come and give a talk. The debate over this talk is so fascinating because it involves the right to ideas different than your own, freedom of speech, and the ever so passionate debate over whether or not pro-Palestinian could be interchangeable anti-Semite.

Even though I don’t get overtly passionate or involved in the Israel debates, I do like when the debates over freedom of speech happen. When this debate started, I watched those same people who threw Rabbi Wallerstein under the bus and called for the boycott of his speeches, rise up in support of Khalidi. Whatever happened to opposing viewpoints? Whatever happened to allowing the freedom of speech? I’ve watched folks go ape-shit over one or two insensitive comments about the gays community, African Americans, or women, while they are more than willing to stand up and support the freedom of speech rights of folks who are calling for the destruction of Israel. Have we all gone mad? Have we lost our minds?

Interesting how a Jewish school could even have a thought to bring in a guy who supports the PLO. That’s akin to bringing a proud member of the KKK, Niturei Karta, or Westboro Baptist Church. I doubt we would have seen the same support for someone who was critical of the LGBTQ movement, in fact the same people supporting different views for those same students would probably rise up against such a preposterous idea. I wish people wouldn’t lie to themselves. I wish those who wish to condone his views, would simply come out and say it. I when people wax poetic about freedom of speech and alternative ideas, when they only support such things ideas and speakers that many people already agree with.

← Is it cholent or stew?
Is your chabad preschool run by meshichists? →