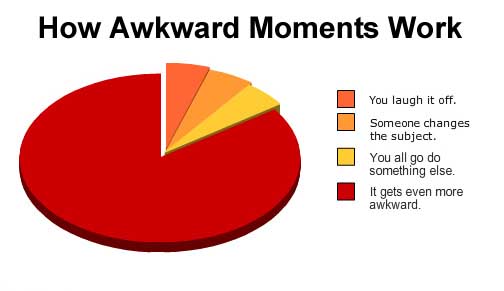 One of the perks of being frum is being a shabbos guest or host on a frequent basis. I’m not sure that other religions or people are as open as those in the Orthodox world. I’ve had loads of BT’s ask me why on earth random people would invite them to their home for shabbos, and not only for meals, but to stay for a weekend at a strangers home is quite odd to most of the world. Obviously, when you invite folks over or you are invited over, it can make for some embarrassing moments. Over the years, I’ve had hands placed on my thigh by hosts and Rabbis alike, I’ve been caught rummaging through the refrigerator in my underwear, and I’ve farted fairly loudly while introducing myself, it’s been a wild ride and it seems that everyone has some interesting stories to share, which I encourage you to do so.

2) Loud Bathrooms: I can’t think of anything worse than a bathroom right off the dining room, especially one that has no sound barriers and an incredibly loud echo. Years and years ago, I was eating at this family in Rochester as a young yeshiva guy and I suddenly had the urge to go. Upon first load drop, I realized that I had some serious shofar blowing to do and I had to let it rip. I’m sure that everyone eating cholent and chip salad could hear me regardless of how loud they sang yona matza.

3) The one armed man: I was once sitting at a relaxed shabbos table and we were talking about rolling joints, I began to wonder out loud if one armed people were better at rolling joints because they were better at everything because they knew their one arm better than most dealt with their two arms. The room stood still, the host dropped her fork and I kept going. I hadn’t noticed that one of the guests had only two fingers on one of his hands. He had a big smile on his face and suddenly everyone erupted in laughter, sure I felt like an idiot.

4) Footsie at the shabbos table: One of the best places to get some under the table action is at the shabbos table, sometimes the meal can be dragged out for hours. One time in my younger days before I knew any better, I felt someone constantly getting their legs entangled with mine. Naturally, I was scared, but I kept allowing them to fondle me with their legs. Since the only people with under table access to my legs were the Rabbi and Rebetzin it made for one of the most awkward moments I can remember. Thank God, no one decided to stroke my thigh.

5) We hate your blog: There have been several embarrassing moments when people realized they were sitting at the same table as “frum satire”. No one has actually got up and left, but suddenly the meal ended and that’s the last I heard of said people. I was invited to a meal once and the girl who invited me told me that her boyfriend hated me, “but I could still come”, I didn’t go.

6) The stuffed up toilet: I bet you if I walked into any random shul and asked how many folks have stuffed up toilets in houses they were invited to for shabbos, everyone would raise their hand. The stuffed up toilet is most awkward when it’s done in the middle of the night and you’re staying at a house where you have a crush on one of the daughters. It can also be awkward if it’s done in the middle of the fish course at lunch. The best time to stuff up a toilet is right before you leave someone’s house, so you don’t have to look at them – knowing that they know your inner secrets.

7) Worse than stuffing up a toilet: David Sedaris wrote about the poop that wouldn’t flush and that instantly brought me back to the long logs that were unfit to travel down the small toilet holes of kollel yungeleit apartments. At these moments it’s important to have hakaras hatov for the plunger and brushes that most civilized people have next to the stack of consumer reports in their bathrooms. Stuffing up a toilet is one thing, but getting everything down, except that last stubborn log is a whole new madreiga.

8) Caught the host without her sheitle on: Before I knew about the intricacies of hair covering, I thought that everyone had their head shaved. These were the days before modern orthodox folks started covering their hair en mass. I’ve walked in on quite a number of women with their hair uncovered. Besides for embarrassing them, it’s a terrible thing because most women look a bit weird without their sheitles when that’s all you’re used to. The first time I saw a woman with her head shaved, I got downright scared and it was hard to face that lady again. Luckily I never walked in on a lady in the midst of changing their clothing.

9) Midnight snacks: The best hosts are the ones who actually mean it when they tell you to make yourself at home. I usually take them up on their offer and they are usually shocked. Don’t say it if you don’t mean it. One time I was staying by someone in Monsey and their fridge was stocked with goodies, when I got back from the bar mitzvah I was attending on Friday night everyone was asleep. Like I would do at home growing up, I got down to my boxers and began to rummage through the fridge. I didn’t see the look on my hosts face, but I’m sure he was a little fazed at finding his almost naked guest fully submerged into the fridge with a pile of leftovers forming on their counter top.

10) Who peed all over the floor: As you can see, most embarrassing shabbos guest/host moments involve bodily functions. I was once staying by some folks and they didn’t have a nightlight in their bathroom. In the middle of the night I really had to go and I had a lot of pee to let loose. In the morning, the mother was wondering who peed all over the bathroom. I admitted that it may have been me because I should have sat down. I was made to clean it up and it was a ton of pee.

← What’s next? Kosher Diapers?
Women are starting to come to shul during the week →