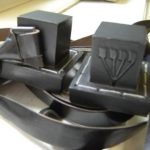 While the entire frum community is in up in arms over whether or not women can wear tefillin without hurting their chances at a good shidduch, I have moved on and am alarmed at the possible fallout from this weakening of the mesorah. You see, unlike most folks, I look to the past and future to deem if the present is really a good thing after all. I understand the fear that women will suddenly become promiscuous by becoming closer to Hashem without the right intentions, but I’m looking beyond the wrecked shidduchim, morning muffin tops across the mechitza, and the debate of Rashis daughters really being OTD and not something to base our paskening off of. I’m fearful of the fences around fences that are slowly coming down.

It’s pretty much understood that if you don’t keep chumros and random post Shulchan Aruch stringency’s, you will eventually whither away and become conservative. I think the modern orthodox world is headed towards conservatism and I’m not sure why they are so scared. I guess we can compare it to yeshiva guys fearing the word “modern” when they become learner-earners or go to college. Is this really such a bad thing? These so called neo-cons will be a great thing for the conservative movement, shuls with many shomer shabbos people, mechitzas, and no microphones or electric toilets. A hybrid, or maybe a hearkening back to the days of yore when the conservative movement followers shared the same theology as its rabbis.

My biggest fear is that when we troll the rishonim and try to justify our breaks with the mesorah, we may start to realize that much of our religion is based on stringency’s. I sure hope that everyone doesn’t wake up one day and decide to follow the shulchan aruch with regards to milk and meat, or worse yet, the Torah. When’s the last time you had a fried goat steak that was battered in buttermilk from it’s mother? It’s pretty hard to find and better yet, chicken and cheese is probably less of a problem than women putting on tefillin, at least the chicken is dead already and cannot become a feeble minded whore that distorts the words of the gemara because they don’t have the right intentions.

What about spehardic vs. ashkenazic custom? I fear that one day, white people will eat rice crispies on pesach and justify it based on halacha and not image. What about justifying not covering ones hair, or not wearing a yarmulke except to make a bracha. Such fears I have.

I fear that one day, those who scour obscure sources will find out that there is no sources for sexy sheitles, black hats, streimels, forsaking work for kollel, mistreating goyim, supporting dishonesty in business, and tax fraud. I fear that those who wish to say that women wearing tefillin is a good thing, will suddenly believe that women should get full time jobs and careers.

I fear for the men who may be exposed to arm-ervah while taking up space in the women’s section during shcachris. I fear for the women who will now be missing z’man krias shema because they daven at later minyanim, because they need to watch the children during the netz minyan.

I fear that the men will suddenly lose their grip on the frum community. I fear that there will be articles written by women on the frum websites, where they talk about their views. I fear that this will break down our tznius and frum media will finally show women’s faces in women’s magazines. I fear that the thought of tefillin on a woman may cause a man to have improper hirhurim and lead to a holocaust of wasted seed that will chase the Jewish people for eternity around the cul de sacs of Lakewood.

← Hamodia should be ashamed of themselves
Once the wedding is over, you actually have to speak to your husband →

37 comments for “The fallout from allowing women to wear tefillin”