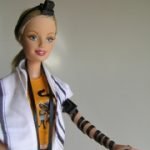 I’m pretty sure that the frum world is on high alert at the possible infiltration of Open Orthodoxy to our heimishe institutions such as SAR and Ramaz, who have decided to allow women to don tefillin. Ramaz took it one step further than SAR and said they will allow girls to put on tefillin in coed minyanim. Although there is no word as to whether or not the girls will be counted in the minyan, sources tell me that many folks are fearful that this is the beginning of the end. Apparently the more medrnishe Bais Yaakov’s are next. In my opinion, breaking tradition is perfectly acceptable when there are valid reasons to do so. Allowing girls to experiment with tefillin is akin to letting kids smoke that first cigarette.

1) It’s easier to classify women who wear tefillin: Instead of trying to figure out what stream of Judaism a certian girls or woman comes from, you can now just ask them what they think of women who wear tefillin. This is far easier than asking them what their tznius levels may be. It’s also easier than judging women based on their methods of hair covering or whether they wear pants or not.

2) Upper arms are sexy:  There’s nothing like some good upper action to look at during pisukei d’zimra, I’m all about ervah in the morning, especially when some BT is up there taking all day. I assume that Orthodoxy, no matter how open it gets, will keep the whole mechitza thing.

3) It prevents intermarriage: In a world where there are girls who literally have no idea what tefillin is, imagine the zechus to have girls not only know from tefillin, but they know how to scam that guy in the airport selling them by asking them where the other arm is. The more Jewy things they do, the less likely they will be to marry goyim.

4) Maybe they will one day be frum: Maybe by taking on extra mitzvos for the wrong reasons (in the frum community they seem to think every girl who wants to go beyond the letter of the law is a raging feminist) they will eventually see the beauty of miitzvos they have to do, like shabbos candles and supporting their husbands gemara habits.

5) Safrus Industry boost: If enough frum girls started wearing tefillin and since they were frum, they needed it to be kosher, this could mean a boom for the safrus industry. The safrus industry has taken a serious hit in the internet age where every sefer is online. I do fear that many sofers may sell passul tefillin to girls in the hope that they make bracha livatala’s because of their obvious lack of tznius.

← I’m obsessed with wearing shatnez
Since when did shvartze become a racist word? →