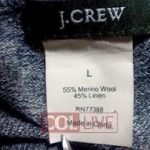 My parents bought me my first good suit for my bar mitzvah, they told me that since I was going to be responsible for mitzvos, I should take it to the local shatnez tester and get it checked out. The shatnez guy told me it was shatnez, but I never brought it back to him, because he would have to damage the lining of the suit with his cut outs and my suit was so smooth and comfy, that I knew it would help my laining. Over the years I’ve grown obsessed with shatnez suits and clothing. Many people don’t understand the aveira of shatnez, but my theory is that it’s just another aveira that makes amazing things assur.

I stayed in the shatnez closet for many years, I remember one time someone borrowed my suit jacket and they noticed I didn’t have an official tag that proved it was shatnez free, it ended up in the garbage because the guy thought he would do me a favor and get it checked. I’m at the point where even the thought of those shatnez checkers gives me a shudder.

I feel like everyone has an aveira they’re machmir on, mine happens to be shatnez, others struggle with shabbos, kashrus, shomer negiah, or ever min hachai. Everything else I do like a normal yid, but my raging yetzer harah for shatnez won’t let up. It’s as if, Hashem directs me to buy shatnez clothing to prove that there is in fact a reason for shatnez, other than a chok. Whenever I hear discussions about not wearing shatnez because God said not to, I want to say, “shatnez suits are the smoothest in the world” but I remain silent and wallow in the misery one goes through when stuck in the closet.

I wonder if there are other secret shatnez wearers like me.