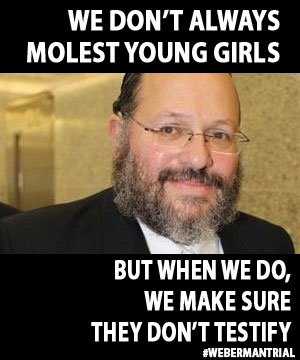 Monsey – It’s been almost a decade since being a frum sex offender became fashionable and in all that time, many community members have wondered about whether to allow convicted sex offenders into their shuls. Apparently children come to shul and are often unaccompanied by adults, and are used to “taking candy” from strangers. Rabbi Yaakov Horostein is applauding the latest effort to allow sex offenders to daven without distractions, such as little boys and girls. “Do you know how hard it is for a child molestor to concentrate during anim zemiros when there are little kids singing together” Rabbi Horostein related, it is next to impossible for them to keep their pants on.

Not only will the shul be a place for sex offenders to daven and learn in peace, but community supporters of sex offenders will likely become members as well, so they can form strategies against the chillul Hashem that supposed “victims” try to create. There’s been an outpouring of support from unexpected places like Williamsburg and New Square, communities that rarely support organizations outside of their own community.

Although the shul will allow children to attend, they will be accompanied by adults. Many parents are excited about the chinuch opportunities this is likely to create, this is a great way for parents to teach their children about what to watch out for when attending yeshiva, going to the mikvah, or being counseled by unlicensed professionals.

Many have wondered if the shul would be akin to having a place for folks who are mechalel shabbos, but community leaders have said repeatedly that sex offenders are not violating any Torah commandments and are merely a victim of societal morals which don’t match our Torah values.

The fledgling modern orthodox community in Monsey and the formerly religious joined hands in a candlelight vigil against the creation of the shul, they fear that this shul is rewarding sex offenders. “Why should sex offenders be rewarded for their disgusting behavior?” one kippah srugah wearing protestor whined. Others took note that the only protestors seemed to be “people who weren’t true Torah Jews”.

Instead of the loshon horah involved in debating whether or not to let sex offenders into shul, we should be zoche to help fund such an endeavor. The entire community can benefit from such a makom Tefilah and I say to give them support. Hopefully we can break the trend of vilifying frum and ehrliche sex offenders and make a true Kiddush Hashem.

45 comments for “First shul for sex offenders opens in Monsey”