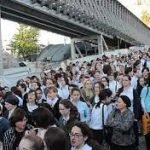 Ever since the Internet Asifa, more and more frum people have discovered the joys of the internet. Unfortunately, one of the things the Asifa failed to teach the throngs of people who showed up to hear the wisdom of the gedolim, was that the Internet is kind of like Hashem in many ways. You can try to conceal yourself as much as you want, but in the end, nothing is private. Apparently, many folks did not heed this advice.

There is this terrifying trend of “women only” videos popping up on the internet, put out by women expecting only women to watch. I have noticed, more and more frum girls putting up untznius videos of themselves modeling tznius clothing, sheitles, and kitchen appliances with the expectation that anyone on the internet gives a damn about their “women only” warnings.

You can even see videos of women singing and playing music, which is a direct violation of hilchos tznius. It is unfortunate that it has come to this, but we need to admit that the Internet Asifa was more of a business conference for men trying to get into the filter industry. I’m not sure why the men didn’t come home from the conference and relate to their wives the important information that the gedolim – today’s preeminent internet experts – gave over. It seems that in this day and age the only people who complain when their videos get sent around to the public – are frum girls.

Even with privacy settings, the internet is like Hashem, you can hide all you went, but the internet and Hashem are always watching. Maybe I could teach a class at my local Bais Yaakov about this fact. For instance, when you put up a video, only to realize it will hurt your shidduch chances, it may have already been copied and placed on other sites. If you don’t want men watching those sexy videos of you and your Sternberg Pioneer friends doing untznius things like running and playing sports, don’t post them on the internet.