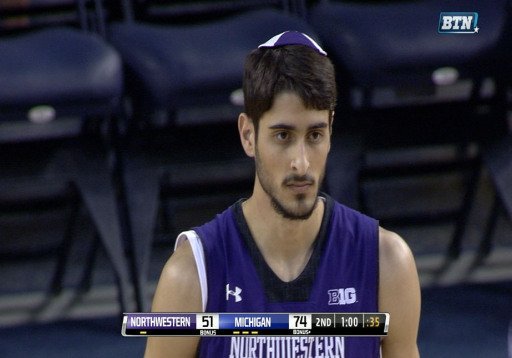 I was just reading an article about the first Big Ten player to wear a yarmulke during a game, I was instantly filled with a sense of pride over what I viewed to be a tremendous kiddush Hashem. Aaron Liberman is following in Tamir Goodman’s footseps. He doesn’t have to wear his religion on his sleeve, it’s not explicit halacha to wear a yarmulke, there are plenty of people who don’t even wear a yarmulke to work (which I’m actually very dismayed by) He chose to identify as an Orthodox Jew in a public setting, he chose to tell the world that one can be a religious fanatic and play competitive basketball.

In my experience, one of the biggest misunderstandings of any religious fundamentalists (face it, being Orthodox Jews lumps us in with Mormons, Christians, Muslims, Hindus, etc…) is that we aren’t just locked in a room surrounded by holy books and being taught by holy men all day. I think that peoples ideas of Orthodox Jews are skewed by Hollywood and many think that in order to be Orthodox, one must have a beard, hat, and peyos. Almost every time I meet someone who has never met an Orthodox Jew, I get asked the beard and sidelock question, I get asked about the blessing of the meat and they almost always wonder what life without bacon cheeseburgers is like.

In my opinion I think that being a public Orthodox Jew is a good thing. I find myself wearing my yarmulke publicly in all sorts of places, while most of my peers only wear it on shabbos, the rest of the time they don’t wear it or they wear a baseball hat. I grew up in Manhattan and we almost always wore baseball hats, fearing that the general population was antisemitic. Personally, I doubt that, in my experience most people don’t know much about Orthodox Jews, their opinions mostly come from entertainment and any idiot can tell you that a lot of that is based on stereotypes and exaggeration. Whenever I see a fellow yarmulke in the street I jump for joy, I can count the number of times on one hand that I’ve seen one in the Bay Area.

89 comments for “How about some Kiddush Hashem”