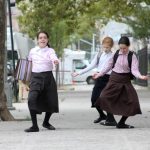 I’m sick of all the negativity that seems to be going on in the frum community these days. Jews hating other Jews because they don’t keep the same standards. Jews hating other Jews because they have different ways of practicing or not practicing, different Rebbe’s, role models, and inspirations. It’s truly disgusting, whenever I get on the internet, I’m sick with shame. It’s like all we can do is look at the negative traits of others and not focus on the positive ones. Blogs, forums, and news sites are all at fault, those active on Facebook and Twitter are at fault, social media makes everything blow up for a moment and sudden everyone is focusing all of their negative attention at this person for something they said or that person for someone they defended or for an unpopular view. Why is it that we never read about how good it is to be a frum Jew these days? Why is it that we only hear about how bad it is? If just a few bloggers could write something positive once in a while, it could fill us with a little light once in a while.

Am I the only one who thinks that being frum is better than ever? Am I the only one to notice the advances in our way of thinking to the point that our community is full of goodness that outweighs the negativity?

Women Rabbis: For the first time in history, women have finally been let out of the kitchen and there are tznius, aidel, frum girls who can finally become rabbis and learn gemara without being ostracized by the community. As a kid I used to ask people why women couldn’t be rabbis and I was never satisfied with the answer. It’s high time that the frum world recognized that women were not all feeble minded and that some of them could actually learn technical gemara and halacha without becoming too promiscuous. For the first time, there are religious Jews that are knowledgeable enough to admit that women can halachically become rabbis without major upheaval.

Gays: If you asked a frum Jew what they thought of gays 10 years ago, many would have said that we should kill them, or at least throw them out of the community and put their families in cherem. Have you noticed that the conversation has changed? You rarely hear a frum person with such harsh views, slowly but surely, the gays are being welcomed and aren’t threatened with violence anymore. The reaction of the frum community to the gays is truly a kiddush hashem. I never expected this kind of open mindedness, even though personally I think we should put them all in cherem, I’ve decided to allow my community leaders to make the decisions.

Salad: Have you noticed that the frum world is obsessed with salad? Well, not too long ago salad was very taboo, because many folks felt we weren’t on a high enough madreiga to deal with the difficulties of checking lettuce. Apparently the yetzer harah for insects ended during Y2K and this means that there’s been a big rage over salad. I used to be embarrassed to be frum because all of our food was brown, but now I’m proud to be a frum Jew because of our colorful meals.

Daf Yomi: Can you imagine 90k people in one room, now imagine they were all bowing down during moddim and had hats on? The siyum hashas is enough reason alone to enjoy the frum community’s accomplishments. Shit, even I throw down daf yomi once in a while, greatest way to kill some time before work and feel like you learned valuable information lishmah.

There’s no such thing as a misnaged anymore: Remember when misnagdim and chassidim hated each other so much that they used to kill each other. Those days are gone, even when I was a kid you could tell a chossid from a misnaged, nowadays the misnagdim respect the chassidish rebbes and visa versa. Sure, there’s lots of infighting about which rebbe or torah sage you support, but the general atmosphere is light and friendly.

You don’t have to sew your own stockings anymore: It used to be a painstaking process to sew seams on your stockings in order to adhere to the strictest forms of tznius, but nowadays you can buy them with seams already sewn in, this has made households more efficient and given women more time to focus on shalom bayis, hachnasos orchim, and bikur cholim.

Frum and wealthy: It used to be that the bulk of the frum community was poor, had to live with all their family in a small apartment, and couldn’t afford much more than the basic necessities in life. These days, the frum community enjoys more wealth than ever. Open up the average frum publication and you will see dozens of ads for luxury vacations, upscale apartment listings in Israel, and million dollar raffles to try and get Russian kids into yeshivos. It’s quite amazing to see and these frum rich people employ thousands of people by giving them full time jobs as meshulachim.

Tznius can be sexy: When I was growing up, tznius was associated with frumpy women. To be tznius, meant you wore a shabbos robe with shoulder pads and some hideous shiny plastic jewels. It used to be that sheitles could be easily discerned from real hair and that frum women were hardly seen as the sexy bas yisroels that they could be. Nowadays that has all changed, tznius is no longer ugly. There are fashionable tznius stores, there are tznius hair coverings that are attractive and the general look of today’s bas yisroel has gotten more tznius and more sexy at the same time. If you want to see Hashems true beauty and make many brachos on the beautiful creatures he created, just take a stroll down Kingston Ave in Crown Heights any day of the week. You will see dozens of sexy, tznius, and aidel chassidishe maidlach.

← Does this New York Post cover offend you?
How about some Kiddush Hashem →

62 comments for “Can we focus on the positive things happening in the frum community?”