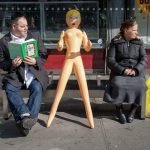 I saw this comment in response to one of those “frummy society is in a downward spiral towards immorality posts.”

Anyone who thinks America’s morals are getting worse is simply blind or a sheep being led blindly. Aside from the homosexuality issue, which from a purely democratic point of view, makes sense, since not everyone believes in our torah as they eat shellfish and cheat in business, We have abandoned slavery, given women the vote, given Blacks the vote, eliminated separate drinking fountains and buses, can publicly say what we want and be religiously open, we no longer rape and pillage wantonly, we have rules forbidding child molestation – something the torah does NOT openly forbid BTW, and many other examples of improved moral elevation. The issue of homosexuality may be abhorrent for religious Jews and Christians, but it is ONE factor against many when it comes to “Moral” levels. Let’s not be so blinded by a singular topic that we forget how far we have come. let’s appreciate the road traveled and getting to this point that it can even be openly discussed, where just a few years ago, this topic would never make it in public.

I also wonder about the whole notion of religion and politics, is it right for us Jews to say that our religion should dictate morality? It always seemed a bit backwards that so many Jews voted based on their Torah views, when voting for something or someone seemed to make sense when the most amount of people benefited without hurting others. Is American society or society in general less moral today, or just less in line with your Torah views?