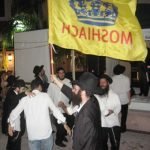 There is this little fight going on in Chabad these days about cults. Apparently, one of the best ways to maintain your cult is to call out other cults. I had no idea that Orthodox Jews of any stream, especially Chassidim, would even be allowed to call out cults. Chabad is definitely the best example of a cult within mainstream Judaism. Chabad gets thousands of people to join their cult every year, by serving good food, opening their homes, and convincing potential male members that they can look like slobs and marry beautiful women. Members of the chabad cult look up to their leader who died, but will rise up to redeem those cult members soon. Not sure what you think, but that sounds like a cult. Shea Hecht, who proclaims himself as a cult buster (when you’re a cult leader, you don’t want cult capitalism and so you need to fight against other cults) is on this rampage against some group called “Call of the Shofar“. I actually know people attended Call of the Shofar and they didn’t come back brainwashed, they came back renewed in their sense of self, but they never went back or join the cult so I’m not sure about the whole thing.

If Rabbi Hecht stopped at the cult thing, I would merely call him a fool, but he “as a chabadnick mind you” has gone beyond the cult aspect and decided to call out Call of the Shofar on Avodah Zarah issues. I thought we were well past the stage where we had a tayva for avodah zarah. Does he not realize that much of the Jewish world considers chabad to be a cult that is into avodah zarah? I’m really perplexed, if it was someone who wasn’t part of a cult, I’d be more likely to listen, but you can’t be a cult leader and call other out on being a cult. Chabad and much of ultra-orthodoxy demonstrates cult ways and therefore I’m liable to believe that the marketers at Call of the Shofar paid for bad press in order to gain new members. Most folks wouldn’t have heard of them if not for this cult debate.

I think that calling it a cult is a great way to confirm that Call of the Shofar inspires people and makes them see the light (whatever that may be) It reminds me of those times when my Rabbis would point at other religions and call them crazy because they made no sense. It seems pretty hypocritical for anyone in Chabad to call another group a cult.