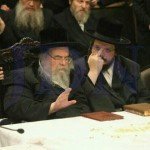 While I agree with you on the gay marriage issue, I can tell you that some of the greatest Orthodox rabbis of the 20th-21st centuries were clean shaven. Rabbi Avi Weiss, Rabbi Eliyahu Teitz, Rabbi Arthur Schneier, Rabbi Yitz Greenberg, Rabbi Aharon Lichtenstein, Rabbi Marvin Heir, etc.

And how many bearded Orthodox rabbis have been indicted recently for all kinds of fraudulent business practices and child molestation. Heshy Fried doesn’t know what he is talking about and has invalidated his own argument. Shame!!!

Unfortunately you are making many assumptions which are simply wrong, many of the Rabbis you mentioned fit nicely into the “orthodox” affiliations that you have made for yourself, but in the frum world most of these men are simply folks wishing to call themselves Rabbi. Teitz is the leader of an institution which allows and encourages secular subjects and has openly violated the laws of mesirah by cooperating with law enforcement when sexual misconduct arose at his schools. Lichtenshtein has a very treife PhD in literature from Harvard, and Avi Weiss wishes to break our holy mesorah in an effort to take women out of the kitchen and off the birthing stones to make them Rabbis, Yitz Greenberg is married to a feminist and encourages dialogue between idol worshipers and Jews. Unfortunately, your group of clean shaven Orthodox rabbis has proved my point. None of these Rabbis would be trusted in the frum world, hence they had to join up with Yeshiva University which is considered worse than any other college in the Yeshiva world, because it attempts to portray Orthodoxy in an Anti-Torah way.

Need I say more. It’s plain to see that clean shaven Orthodox Rabbis are openly going against the age old adage of the wise man in the long flowing beard. It seems that getting a clean shave is not conducive to being a respected and authentic Orthodox rabbi. It seems that clean shaven Rabbis are seldom the respected gedolei hatorah, take a look at the old Agudah Conventions, the ones where all the European gedolei hatorah attended, only Rav Moshe Sherer is without beard and he got a heter kiruv from Rav Moshe. I’d like you to find me one clean shaven rabbi who got a heter to cut the corners of his face, I know that the laymen of this generation are not on the madreiga to keep their beards, I’m willing to acknowledge that hats and beards are not the norm. I’m willing to acknowledge that you can be Orthodox and have a clean shaven face, not wear a hat, and have a secular education. However, I just don’t think that they should give semicha to clean shaven rabbis, they are a disgrace to the mesorah.

And how many bearded Orthodox rabbis have been indicted recently for all kinds of fraudulent business practices and child molestation. Heshy Fried doesn’t know what he is talking about and has invalidated his own argument. Shame!!!

This has been a very tough thing for me to cope with, but I’ve asked my personal Rav and he told me that it’s the yetzer harah of our time. He told me that the yetzer harah wants us to believe that having a beard leads to sin and this will cause people to shave their beards and eventually assimilate. My Rav told me that I can shave my beard because I work in the kiruv industry, but that I shouldn’t shave it because of a few people who’ve decided to go against the Torah by doing illegal things. He did mention that child molestation is probably way over blown and that tax fraud may be justified because the governments unwillingness to give tax credits or vouchers to those struggling with yeshiva tuition.