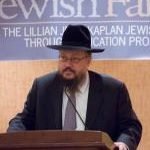 It’s rough out there in Charedi land, too many Rabbonom get mixed up in affairs they shouldn’t be involved in and end up being caught up in the hypocrisy that leads to so many crisis of faith. I’ve been getting an alarming number of emails lately concerning crisis of faith, unfortunately many of these emails are coming from folks who are married with children that cannot take the Daas Torah hypocrisy that is becoming a daily thing. Many of these people cannot believe it when they see their local recently released sex offender getting chosson bereishis or their friends not getting married because the great aunt had a divorce. The lack of dan l’kav zechus, the continued sinas chinam, and this unrelenting Daas Torah is God philosophy is making many people debate leaving the path.

Fortunately, we now have someone we can trust, someone on the inside that is fighting for what is right. That’s right folks, a Charedi Rabbi that is standing up for what is right. Yehuda Leib Tropper is back on the scene and he is trying to help us understand why Daas Torah is so important without trying to shove it down our throats. You may remember Leib Tropper as the guy who readily admitted on you tube that he was only human and had sexual desires. It’s hard for me to respect so many Charedim today because instead of admitting they can’t control their God given desires, they seek to control woman, enact insane tznius legislation, and even beat up women – all because of their lack of control. Leib Tropper is different, not only did he admit to having such sexual urges as bringing other women into the bedroom, he actually offered to speed up a woman’s conversion if she would help him with his tayva. Go speak to folks who are in the middle of Orthodox conversions, many of them would do anything to speed it up and most Rabbis still choose to make the process long and painful. However, Tropper was able to utilize his yetzer harah to accomplish something so good.

I know that many of you feel betrayed by Daas Torah and Rabbis in general, but I hope we can give Rabbi Tropper a chance to show us that not all Charedi Rabbis are shoving things under the rug and acting like they are somehow superior to regular people like us. Tropper never felt like he had to justify or apologize for his desires, we are taught to work with what Hashem gave us, I’ve noticed that those who have a sexual desire for little boys, end up channeling that desire into being the best rebbes they can be. Those with a desire to steal and cheat tend to utilize those desires for tzedaka and chesed. I think we could all learn a bit from these giants of Torah and chesed, by utilizing our negative desires for the betterment of klal yisrael.

I’ve put one of his videos down here to show you why he deserves the frum satire gadol of the month award:

24 comments for “Finally a Charedi Rabbi we can all respect”