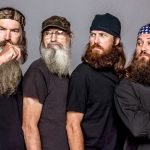 I think the Duck Dynasty fiasco scares me so much because I agree wholeheartedly with both sides. As a religious person who follows an ancient, antiquated document that didn’t really keep up with the times (bigotry, idol worship, slavery, child marriage, sacrifice, etc) it’s becoming harder and harder to hold a public view about my religion because of it’s decidedly anti-modern times views. If you state your supposedly God-given views, you will be ostracized from your workplace for not following the status quo. What happened to freedom of speech, freedom of religion, and living in a country where people are not discriminated against because they hold an unpopular or in this case, an un-liberal view? Sounds pretty scary to me, what about you?

Sure sounds scary when someone cannot espouse their religious beliefs in public without fearing for the Salem Witch Hunt. It kind of reminds me of those days of yore where Commies were called reds and they were hunted for their personal views. Well, how would you feel if someone was awfully religious and started spewing things about it being sinful to be Jewish? That would scare me a bit, would scare others too, and I’m sure if someone like this Duck Dude said that in an interview, we would all be calling for his resignation, apology and so on. The gays, no matter if you “agree’ with them, are pretty much the same as any other group of people. In fact the gays are probably a larger percentage of the US population than the Jews. Yet, when someone makes an anti-Jewish statement the same thing happens, do the gays deserve any less rights than the Jews? I think not.

So for me this Duck Dynasty thing is actually scarier than for you, because both sides make sense to me. I’m fearful that this is one step in the direction towards censorship of religion and religious views. A step towards declaring the Torah or the Bible as racist documents, towards bannings, towards a day where we must become like the Morano’s and learn Torah in secret. Is my fear too unrealistic? I’m not sure, but I guess I listened to too much Micheal Savage and Rush before I moved to the left coast. It takes me back to those times I was warned by my elders about America becoming so left wing that it would ban Judaism and religion in general, are we headed that way?

Or maybe it’s time for religion to get with the program, if you think ancient religious documents apply literally to modern day times, maybe you should keep that to yourself. Religion has evolved for thousands of years, but suddenly it’s stuck on the gay thing, suddenly it can’t evolve and people feel the need to tell the world that they are willing to believe in the modern world, except for sexual relationships. It’s kind of weird, that some aspects of religion have evolved, while some stay exactly the same.

46 comments for “Why the Duck Dynasty fiasco scares me”