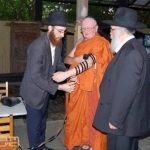 There I said it, it’s not easy for me as a supposedly elitist, cynical, sarcastic, and sometimes angry FFB to admit that I’m terrified and jealous of BT’s. Their inspiration, passion, and willingness to submit to Daas Torah is something that I wish I could do. I’m jealous that they chose to join Orthodoxy and can do it with the ease that I could never bring myself to do. You have to drag me kicking and screaming to shul or to a shiur. Yet there’s the local BT, he got there on time, is happy to be there at 6 in the morning and isn’t fiddling with his smart phone the whole time. I’m jealous of the BT, because they embody what I wish I could do. I wish I could throw away my existential angst and embrace the religion I grew up with. If you’re like me, you’re always thinking in the back of your head the following question: If I hadn’t grown up frum, would I join this craziness?

If the answer is no, like it most probably is, you’re probably in the same boat as me. Openly judging, stereotyping, ridiculing. ogling, and most likely scheming about how long it will take them to realize their mistake. Planning out how you will get them to be your shul talking buddy, figuring out if they will indulge in a little pot smoking like they did in college, or maybe getting them to talk about their former sexual escapades. Naturally, many FFB’s think that leaving a life or sex, drugs, and bacon was a big mistake, but rarely do we ever look past the external goyishe past. Rarely do we wonder what life would be like without the tender words of the Rav in times of crisis, or getting a wedding dress from a gemach. Amidst my existential sufferings, I seldom wonder about reasons to become frum beyond the faulty kiruv logic of the Aish Discoveries of the world that I myself have experienced.

I’m jealous of BT’s because they can look past the existential woes and see the beauty of the religion that I am sometimes too hard on.

I grew up with an angry God, I grew up with guilt and fear and forced education, while these fine folks were coming voluntarily. Fine, maybe some of them were the subject of clever kiruv marketing through inspirational shabbos meals and speeches from Rabbis who used to be rock and roll stars, but that doesn’t mean they can just become convinced of becoming frum. Eventually, these BT’s would see the truth and begin to realize that Judaism was also screwed up, would they then leave and never come back?

I’m jealous of BT’s who believe with in all the stuff I find hard to. The revelation at Sinai, Jewish superiority, the intricacies of the shulchan aruch, that learning Torah is the best way to be a better Jew, and so on. I like to say that I believe it more than I don’t believe it, but that only increases my jealousy of those who don’t wrestle with the lack of logic or reason behind most of the Torah and mitzvos. While the BT is learning mussar and listening raptly to Keleman and Frand, I am trying to work my through Heschel and Kook in search of some sort of help with my conundrums.

We FFB’s have this constant nagging at the back of our minds about our ancestors that died to keep Judaism alive, to keep transmitting the mesorah, how can we even have the hava minah that the mesorah is not 100% fact? How do we have the gall to posit that our ancestors, those same one’s who died al kiddush hashem, died in vein because we wish to let the media convince us that our religion is backward and ignorant. The BT, without any mesorah, without any ancestors to nag them, just rolls up out of Ohr Someyach and joins us in the fight against secularism and they are armed with the passion and inspiration that I, the yichus filled FFB am sorely lacking.

I’m both inspired, jealous, envious, and spiteful at the same time.

I love and hate the BT’s and Converts. I love that they can continue to be inspired through the negative media attention surrounding Orthodoxy on a daily basis. If there are open minded people becoming frum, who remain open minded, there must be something good hidden within our perceived negativity. There must be an enviable amount of chesed going on, because that’s the only thing that can uplift us from the evil that infiltrates the community from within.

Underneath my cynical and existential worries is just a regular guy trying to figure out the purpose of life.

Hopefully the BT’s and Converts will show me what’s up.

20 comments for “Why I’m jealous of Baal Teshuvas”