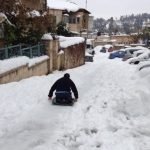 The media, myself included, is constantly deriding the Charedim in Israel for its poor treatment of women. We tend to notice the bad, the bus beat downs, the public protests, riots, the evil modesty signs in Meah Shearim, but we seldom notice their commitment to women. What many of you may have missed, during the pictures and videos of Israel in the snow, are the reports of special transport vehicles for Charedi women to get to the mikvah. I myself was shocked by the mesiras nefesh of women, those same women who were banned from so many things, leaving the comfort of their homes during the worst snow storm in many years in order to merely have sex. Sex is such a taboo topic in Charedi culture, yet here they were risking life and limb to get to the mikvah in what was almost like an airlift.

Unfortunately, some in the media decided to twist this story and claim that thousands of Israelis were trapped in cars, while these special transports went to the mikvah. I’m not exactly sure that saving the lives of Israelis is more important than going to the mikvah, but still, I find it said that some in the media are always looking for ways to twist the story and make it like the Charedim are evil.

In other news, some crack jobs are claiming that the snowstorm hit Jerusalem is because of the arrests of folks refusing to report to draft duty.